ABSTRACT
Collagenous fibroma (CF) is a benign soft tissue tumour with good prognosis. Preoperative imaging diagnosis is essential to avoid unnecessarily extended resection, which may result in irreversible functional damage. However, few studies published to date have reported on the imaging features, associated with this condition. We, therefore, present a patient with histologically proven CF on the dorsum of nose, associated with an unusual appearance on magnetic resonance imaging. Low signal intensity on T2-weighted images and rim enhancement on gadolinium-DTPA (Gd-DTPA) enhanced images are reported in some previously reported cases. However, the unique point about this case is the markedly enhanced nodule revealed in the middle part of the lesion five hours after the administration of contrast media. To our knowledge, this is the first description of late gadolinium enhancement features associated with the condition.

Collagenous fibroma (CF), also referred to as desmoplastic fibroblastoma, is a benign soft tissue tumour with good prognosis. According to the 2013 World Health Organization Classification of Tumours of Soft Tissue and Bone, it is classified as a benign fibroblastic/myofibroblastic tumour.1 Most lesions appear in the subcutaneous or intramuscular space of extremities, joints, and neck.2 Few reports have been presented on CF involving the face. In this paper, we present a case of CF involving the dorsum of the nose with magnetic resonance imaging (MRI) findings; and highlight its features with pathologic correlation.

A 49-year woman presented to our institution with a three-month history of a nodule on the dorsum of her nose. The nodule was slow-growing with pruritus, but without pain or tenderness. The results of physical examination revealed an elastic and movable lesion measuring 2.5×2.0 cm in the subcutaneous tissue of the nasal dorsum, without any change in skin temperature or colour.

The results of a preoperative needle biopsy indicated that the lesion was a desmoid tumour. At the time of the operation, a mass with moderate blood supply was noted, with its posterior edge close to the nasal cavity. Complete resection was performed. Grossly, a solid, soft mass with the appearance of “fish flesh” was revealed. Pathologically, the tumour consisted of fusiform and stellate fibroblast-like proliferating cells, which were sparsely or densely distributed in a background of dense eosinophilic collagen fibers or fibromyxoid material (Figure 2). The nuclei were large and oval to stellate in shape, with small kernels, but no atypia or mitotic figures. Immunohistochemical analysis revealed that the tumour cells were focally positive for vimentin and α-smooth muscle actin, but negative for CD34, S-100, c-kit, and desmin. The final diagnosis was collagenous fibroma.

On follow-up 10 months after surgery, the patient had recovered well, without local recurrence. 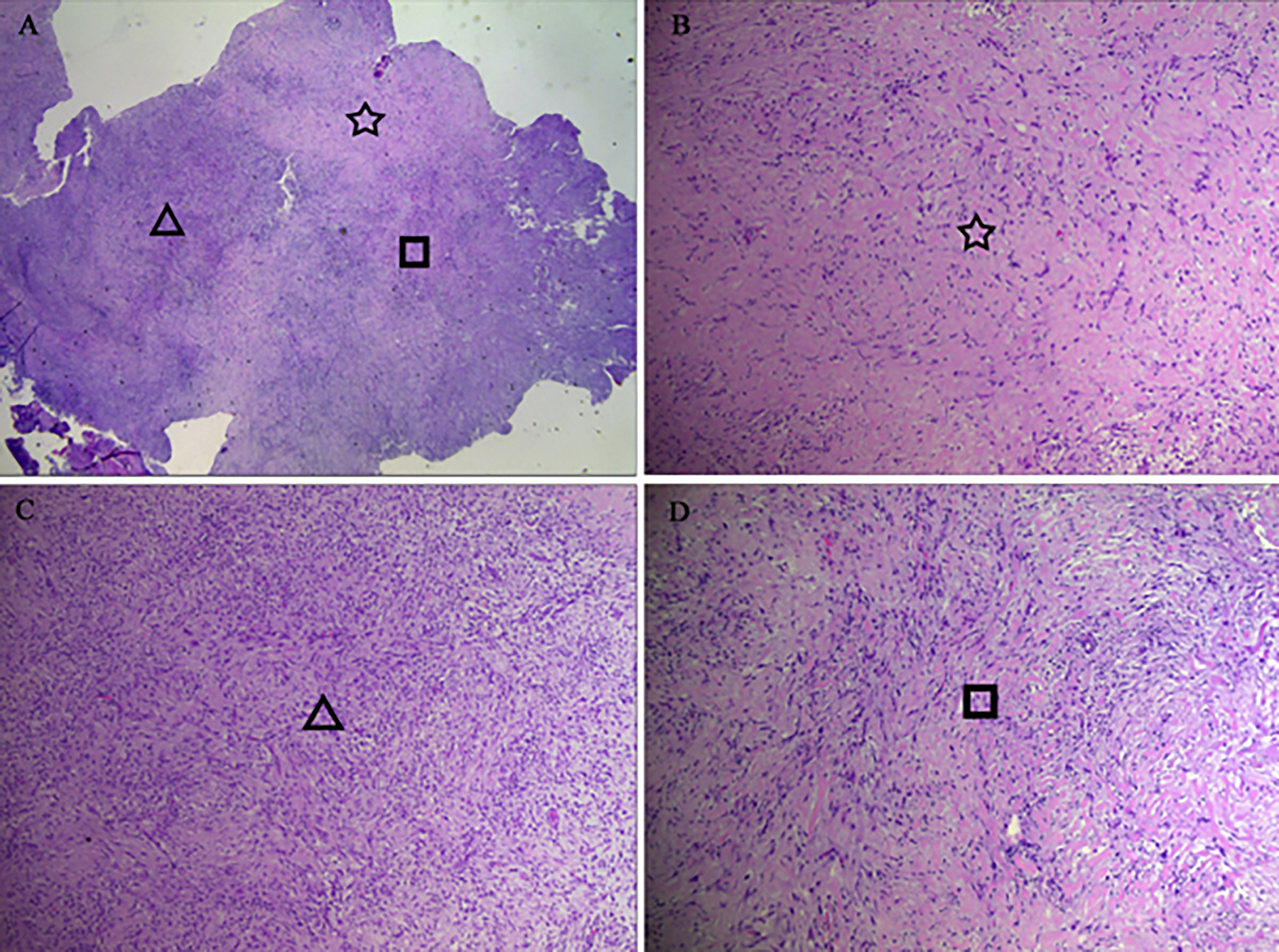 CF was first described by Evans in 1995.3 It, most frequently, presents between the fifth and seventh decades of life, and is more common in men, with a male-female ratio of 5:1. It may occur in any part of the body, including the shoulder, arm, hand, lower limb, feet, neck, back, and abdominal wall.4,5 Patients with CF present with a painless, slowly growing mass. The condition has a long disease course. The optimal treatment for CF is surgical excision alone with narrow surgical margins. The postoperative prognosis is excellent without reported incidences of recurrence.6

Histologically, the lesion is composed of fibroblast-like cells against a background of collagenous or myxocollagenous matrix. Previous studies have claimed that CF characteristically expresses a translocation (2;11) or a rearrangement of chromosomal band 11q12.7,8

The MRI manifestation of CF is variable, but certain characteristics remain relatively constant. SI varies from low to intermediate on T1-weighted images, and from low to slightly high or mixed on T2-weighted images. On T1-weighted post-contrast images, heterogeneous internal enhancement and peripheral rim enhancement are relatively common. Poor or mild internal enhancement may reflect decreased vascularity, as the presence of collagen fibers restricts the dispersal of intravascular contrast agents into the extracellular space. Rim enhancement is considered to represent the presence of abundant blood vessels in the peripheral region of the tumour.4

As for our case, the area with slightly low SI on T2-weighted images (the left part of the lesion) corresponded to the hypocellular area with dense collagen fibers. The area of high SI on T2-weighted images (the right part of the lesion) corresponded to the hypercellular area, with loose collagen fibers. On routine T1-weighted post-contrast images, the degree of enhancement was higher in areas with loose collagen fibers, compared with areas that were dense with collagen fibers, as reported previously. The markedly enhanced area observed after non-routine delay (more than one hour) has never been described before in association with CF. This area comprised highly dense collagen fibers with sparer tumors cells and fewer blood vessels. As mentioned above, collagen fibers restrict the dispersal of intravascular contrast agents into the extracellular space, in addition to impeding fluid movement in the opposite direction. With routine delay times, the amount of gadolinium that diffuses into the extracellular space is limited. In comparison with hypercellular areas, the areas of expanded extracellular space (with dense collagen) increase the volume of distribution and slow washout kinetics, allowing more gadolinium to accumulate. This accumulation of gadolinium may be detected in an extremely late washout phase.9 This theoretical basis has led to wide acceptance of the use of late gadolinium-enhanced MRI for the evaluation of myocardial fibrosis.10

Most soft-tissue tumours present high SI on T2-weighted images, but CF may present a low T2 signal due to its low cellularity and abundant collagen.6 However, low T2 signal is not unique to CF and can also be found in several other soft-tissue masses, including aggressive fibromatosis, neurofibroma, malignant fibrous histiocytoma, and masses with calcification.2,5 Late gadolinium-enhanced MRI and other imaging methods assist in narrowing down the differential diagnosis. However, pathological analysis is necessary for a definitive diagnosis.

In this report, we described a patient with CF on the dorsum of nose. CF should be considered when low SI areas are observed within a rim-enhanced mass on both T2-weighted images and routine post-contrast images. Late gadolinium-enhancement is recommended for establishing the differential diagnosis.

PATIENT’S CONSENT:
Patient's consent was obtained for operation and use of any material for scientific studies and publishing the data.

CONFLICT OF INTEREST:
All authors declared no conflict of interest.