The Role of Ca 19-9, Ca 72-4, Cea and Cholesterol Levels in Predicting Malignancy in Gallbladder Polyps

ABSTRACT
Objective: To determine the association of malignancy potential of gallbladder polyps with tumor markers and cholesterol levels, and at which value the presence of malignancy should be suspected.
Study Design: Observational study.
Place and Duration of Study: University of Health Sciences, Adana City training and research Hospital from December 2017 to November 2020.
Methodology: Ninety patients diagnosed with gallbladder polyp by abdominal ultrasonography, were included in the study. Patients were divided into subgroups of true pseudopolyp, cholesterol-non-cholesterolpolyp, malignant-non-malignant polyp. The groups were compared in terms of age, gender, polyp size, number of polyps, preoperative total cholesterol, HDL (high-density lipoprotein), LDL (low-density lipoprotein), triglyceride, Ca 19-9 (carbohydrate antigen 19-9), Ca 72-4 (carbohydrate antigen 72-4), Cea (carcinoembryonic antigen) levels.
Results: In the true polyp group, polyp size, Ca 19-9, Ca 72-4 and Cea median values were significantly higher (p=0.001, p=0.029, p=0.003, and p=0.007, respectively); whereas, triglyceride levels were significantly lower compared to the pseudopolyp group (p=0.002). Polyp size was significantly lower in cholesterol polyp group compared to non-cholesterol polyp group (p= 0.032), and LDL and triglyceride medians were significantly higher (p=0.031, and p<0.001) in cholesterol group. Among the true polyps, polyp size, Ca 19-9, Ca 72-4 and Cea levels were significantly higher in adenocarcinoma group than non-malignant polyp groups (p<0.05). Cut-off values were determined as >11 mm AUC: 0.906 for size, >24.1 U/mL. AUC: 1.00 for Ca 19-9, >9.6 U/mL AUC: 1.00 for Ca 72-4, and >40 ng/mL AUC: 0.984 for CEA, respectively.
Conclusion: Polyps larger than 11mm with high levels of CEA, Ca 72-4, Ca 19-9, evaluated together, may act as a guide for the clinician in predicting malignancy. The availability of economical and accessible parameters may allow a new algorithm to be developed in the treatment and follow-up approach of gallbladder polyps.

Considering the postoperative pathology results of cholecystectomy due to polyp, the incidence of malignancy varies between 0-5% and it is seen that a very large patient group has undergone unnecessary surgical intervention for a small group of patient.3-5 Gallbladder polyps are divided into true polyps and pseudopolyps (false polyps). Pseudopolyps include cholesterol polyps, cholesterolosis, inflammatory polyps, hyperplastic polyps, focaladenomyosis. True polyps, on the other hand, consist of intracholecystic papillary-tubular neoplasm, adenomatous polyps, and adenocarcinomas.6 When postoperative pathology results are examined, pseudopolyps are the most common; and among these, cholesterol polyps are the most common type of polyp.7,8

Today, different algorithms are used in various clinics to indicate the need for surgery, and in most studies, recommendations are presented with moderate evidence for the operation indication. There is still no final consensus decision on this issue, and this situation causes unnecessary morbidity, cost and loss of workforce. Some investigations give us an idea about the malignant potential of polyps. Among these, endoscopic ultrasonography (EUS) can evaluate different features such as polyp diameter, depth of invasion  and polyp irregularity. Similarly, the PET-CT scan may also suggest the hypermetabolic status in malignancy with increased Maximum standardised uptake value (SUVmax). However, both investigations are difficult to access, expensive, and require experience. Therefore, more inexpensive, objective, and accessible parameters are needed to predict malignancy in gallbladder polyps.9,10

The aim of this study was to evaluate the characteristics of polyp, and compare the serum levels of cholesterol, and the values of the tumor markers Ca 19-9, Ca 72-4, and CEA predicting malignancy in gallbladder polyps.

The study was conducted with the approval of the Hospital Clinical Research Ethics Committee, with Institutional Review Board No. 70/1141, in accordance with the Declaration of Helsinki; and it has been reported in line with the STROCSS criteria.11 It was conducted in  general surgery clinic of this hospital. Ninety patients, diagnosed with gallbladder polyp by abdominal ultrasonography between December 2017 and November 2020 at the University of Health Sciences, Adana City Training and Research Hospital, were included. Data of the patients were obtained retrospectively from the hospital information system and outpatient clinic files. Patients who were diagnosed with polyps in an external centre; whose cholesterol levels and tumor markers were not tested before the operation, and who had undergone previous interventional procedures to the gallbladder, were excluded from the study.

Normality control of continuous variables was evaluated with the Shapiro-Wilk test. Student's t-test was used in comparing the average of the two groups for variables that were suitable for normal distribution. For variables not conforming to a normal distribution, the Mann-Whitney U-test was used for comparing the median of two independent groups. Kruskal-Wallis test was used for comparing more than two groups. Chi-square test was used in the analysis of categorical data. On the other hand, ROC curve analysis was used to calculate the cut-off points of the variables, according to malignancy and to evaluate the separation performance, and compare the areas under the curve. A new variable was calculated according to the cut-off points calculated for the four variables. The cumulative values determined according to this new variable were evaluated with the diagnostic test results. Data analysis was done on SPSS version 21 and MedCalc 19.6.4 software. The statistical significance level was taken as 0.05. 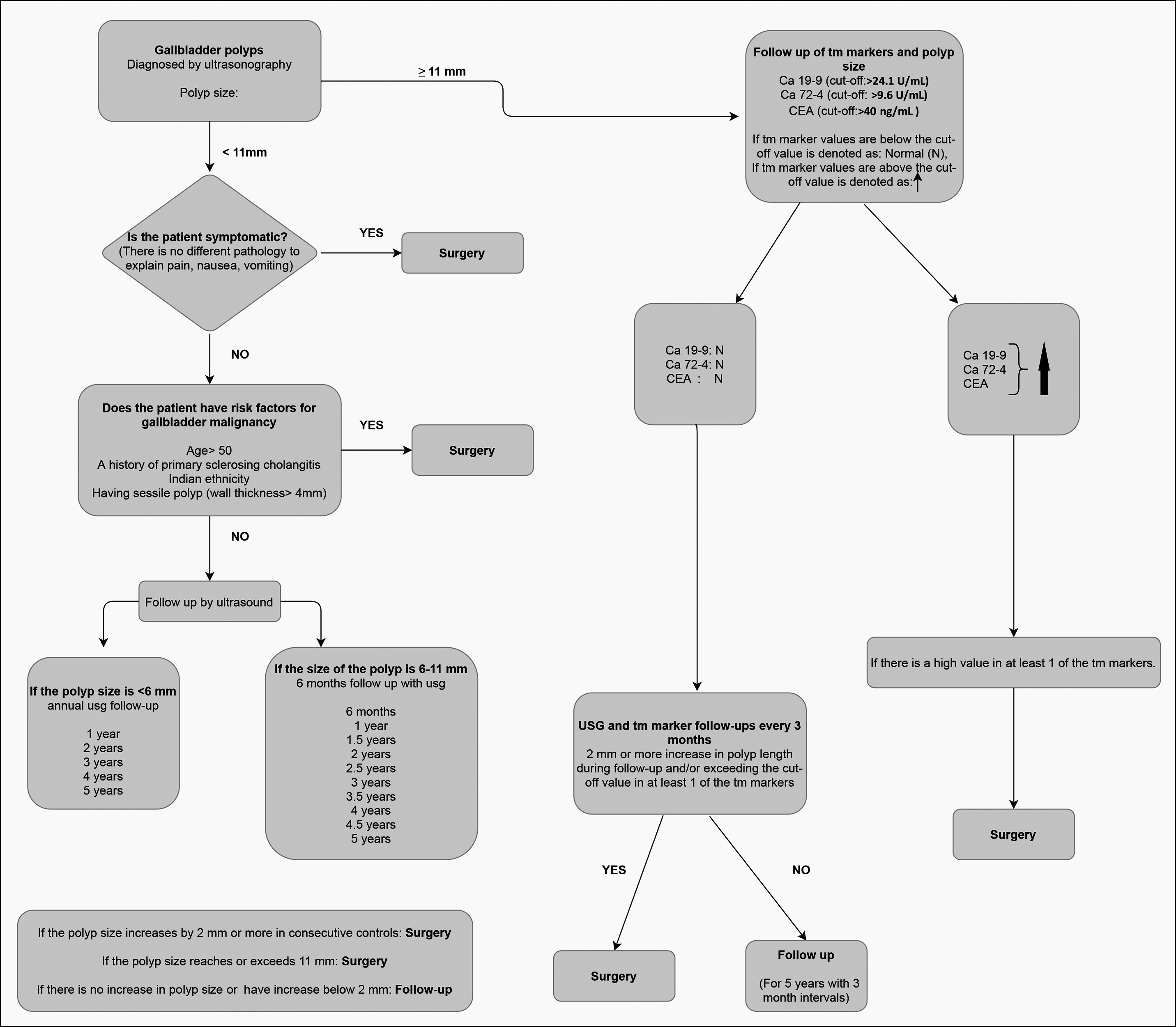 Figure 1: Treatment and follow-up algorithm of the gallbladder polyps.

The average Cea value in the true polyp group was found to be statistically significantly higher than the pseudo polyps (p=0.007). There was no significant difference in total cholesterol, HDL, and LDL values between the groups of true and pseudopolyps.

In the cholesterol polyp group, the polyp size was found to be statistically significantly lower compared to the non-cholesterol polyp group (p=0.047); however, LDL and triglyceride medians were found to be statistically significantly higher (p=0.0031, and p<0.001, Table II). When true polyps were divided into adenocarcinoma, adenomatous polyp, and intracholecystic papillary tubular neoplasm (ICPN), there was a significant difference in terms of polyp size median values (p=0.032). This difference was between adenocarcinoma (16.15 ± 3.66 mm) and adenomatous polyp (8.85 ± 3.86 mm, p <0.05).

Gallbladder polyps are extensive entity in which many factors play a role in the etiopathogenesis and the treatment algorithm is still unclear . In the treatment strategies that are shaped according to patient characteristics and polyp sizes, many factors are involved, from ethnic origin to underlying diseases, and from the growth rate of polyps to size irregularities.

Some progress has been made over the years in the treatment and follow-up strategy of gallbladder polyps by the European Society of Gastrointestinal and Abdominal Radiology (ESGAR), European Association for Endoscopic Surgery and other Interventional Techniques (EAES), International Society of Digestive Surgery - European Federation (EFISDS) and European Society of Gastrointestinal Endoscopy (ESGE). According to the Societies recommendations, if the size of the polyp is >10 mm, cholecystectomy is recommended. However, the treatment varies according to the patient and polyp characteristics if the size of the polyp is <10 mm. It has been emphasised that more studies and more desicive data are needed to determine the optimal management of gallbladder polyps;12 because of low rate of malignancy in cholecystectomies performed for gallbladder polyps. Therefore, for the operation decision, it is necessary to employ more objective parameters that are easy to use, accessible and cheap. This would reduce unnecessary cholecystectomy rate.

The findings of this study helped the authors to modify the existing algorithms by including easily accessible and more objective parameters (Figure 1).

Carcinoembryonic antigen (Cea) is used as a marker in gastrointestinal system tumors. Ca 19-9 is used as a marker in pancreatic cancer and is also secreted from bile duct cells. Ca 72-4 is a tumor marker in gastrointestinal and gynecological malignancies13-15 In addition to these tumor markers, polyp size, one of the main determining factors in the treatment was used for developing algorithm in Figure 1. The cut-off values was found to be >11 mm for polyp size, >40 ng/ml for Cea, >24.1 U/ml for Ca 19-9, and >9.6 U/ml for Ca 72-4. In many previous studies, the operation was recommended for polyps 10 mm or larger in size, and the rates of malignancy in postoperative pathology results varied between 3.7-15%.16-18 These results support that the optimal polyp cut-off value is not 10 mm in patients for whom cholecystectomy is recommended. Therefore, according to the results of this study, that arranged the separations in the algorithm according to the 11 mm polyp size.

Literature review revealed that the risk of developing gallbladder polyp was higher in Chinese men with a high non-HDL /HDL ratio.19 In a study including 487 patients diagnosed with gallbladder polyps and 502 healthy adults, it was observed that high triglyceride and high BMI ratios may be indirectly related especially to cholesterol polyp formation.20 In the present study, the high levels of LDL and triglycerides in the cholesterol polyp group are in agreement with the literature.

In a study by Liu et al., conducted on 917 patients, 306 of whom had gallbladder cancer, looking at the diagnostic values of Cea and Ca 19-9 levels in the diagnosis of malignancy; AUC (Area under the curve) value was found to be 0.90 when this tumor markers are combine evaluated with Albumin/Fibrinogen ratio (AFR), it was observed that it effectively distinguished malignant patients from benign ones.23 This study indicates that CEA and Ca 19-9 values are effective in determining the malignant potential of gallbladder polyps.

In a study by Stefanovic et al., conducted on 124 patients, it was observed that the tumor markers Ca 19-9 and Ca 72-4 increased in carcinoma in situ and early stages of gallbladder cancers, so these markers have clinical importance for diagnosis of early  stage gallbladder malignancies.24

The present algorithm based on results of this study, as well as literature review, recommends that polyps less than 11 mm in size should be divided into two groups as under 6 mm and between 6-11 mm. The authors recommend annual follow-up to the first group and 6 monthly for the second group, for 5 years for each group. Surgery is recommended if the size of the polyp increases by 2 mm or more between 2 consecutive controls, or if the size of the polyp rises to 11 mm and above. If not so, follow-up is recommended.

If the values of Cea, Ca 19-9, Ca 72-4 are below the cut-off values, they should be considered normal (N) and the patient should to be followed up at 3-month intervals. Cholecystectomy is recommend if there is an increase of 2 mm or more in polyp size between two consecutive controls in the follow-up or if at least one of the tumor markers exceeds the cut-off value. If not so, a 5-year follow-up at 3-month intervals is recommended. For polyps larger than 11 mm, if the values are above the cut-off value for at least one of the tumor markers, the patient should undergo cholecystectomy. The reason for this is the high specificity and sensitivity of the polyp size. Besides, the specificity and sensitivity rate in detecting malignancy increases cumulatively when tumor markers are combined with polyp size.

The limitation of this study was that the data after five years of follow-up were not seen and the subsequent follow-up and treatment method could not be determined clearly in the algorithm.

An 11 mm polyp size, with raised Ca 19-9, Ca72-4, and CEA levels provide valuable information in the diagnosis of malignancy. The authors believe that the algorithm they have created in the approach to gallbladder polyps is easily accessible, easily applicable, and cost-effective. It is a more objective and convenient tool for the clinicians in deciding the need for and unnecessary cholecystectomies can be prevented significantly.

ETHICAL APPROVAL:
The legal and ethical approval of the study was obtained from the Hospital Clinical Research Ethics Committee, Institutional Review Board No. 70/1141.

PATIENTS’ CONSENT:
All patients signed a document of informed consent.