ABSTRACT
Objective: To investigate standard modifiable cardiovascular risk factors (SMuRFs) and prognosis of patients with acute coronary syndrome (ACS) aged 50 years or younger.
Study Design: An observational study.
Place and Duration of Study: Eleven general hospitals in Chengdu, Sichuan Province, China, from January 2017 to June 2019.
Methodology: Patients with ACS were stratified into younger group (≤50 years) and older group (>50 years). The baseline characteristics and prognosis were compared for two groups. Survival analysis was used to assess the long-term prognosis.
Results: Among a total of 1982 ACS patients, 322 (16.2%) were of ≤50 years. Compared with older patients, younger patients were more likely to have at least one SMuRFs (90.0% vs. 84.3%, p=0.013). The younger group had a higher prevalence of smoking (62.8% vs. 34.1%, p <0.001) and hypercholesterolemia (36.2% vs. 23.4%, p <0.001) compared with the older group. Younger male patients were more likely to have at least one SMuRFs than younger female patients (91.6% vs. 74.1%, p = 0.011). After the follow-up of 15 (10, 22) months, the cumulative rates of major adverse cardiovascular and cerebrovascular events (MACCE) of the younger patients were significantly lower than those in the older patients [hazard ratio (HR): 0.2661, 95% confidence interval (CI): 0.1932 - 0.3665, p <0.001].
Conclusion: Younger patients with ACS were more likely to have at least one SMuRFs; and were likely to have a better prognosis than older patients.

The incidence and mortality of coronary heart disease (CHD) in the elderly population have recently tended to decrease in most countries. However, a similar decline has not been observed among young individuals.1 The incidence of acute myocardial infarction (AMI) in young population in China has been shown an increase, as reported by a recent study.2 In addition, compared with young male patients with acute coronary syndrome (ACS), the hospitalisation rates among young female patients showed a more obvious upward trend.3

The standard modifiable cardiovascular risk factors (SMuRFs), including hypertension, diabetes mellitus, hypercholesterolaemia, and smoking are vital elements of the Framingham cardiovascular risk score and were identified in epidemiological studies in the 1960s.4,5 Studies have shown that in some middle- and high-income countries, the application of controlling modifiable cardiovascular risk factors in primary/secondary prevention has resulted in significant reductions in the morbidity and mortality of CHD.6 However, only few studies have been performed on the burden of SMuRFs in young ACS patients. By providing evidence for the primary and secondary prevention strategies for young individuals could help further reduce the incidence and mortality of ACS in the young population.

Therefore, the aim of this study was to investigate the SMuRFs profile, diagnosis, treatment status, and prognosis of patients with ACS aged less than 50 years and further subdivided according to gender.

Data were retrieved from the electronic health records (EHR) of each hospital. The collected data included demographic data, cardiac risk factors, past medical history, diagnoses, symptoms and clinical signs at admission, laboratory data on admission and angiographic data, type of revascularisation, and medication at hospital discharge. After the patients were discharged from the hospital, the in-hospital mortality of the study population was obtained by inquiring the discharge status of the patients through the EHR system.

A follow-up of the patients was performed at 1, 6 and 12 months after discharge; and annually thereafter, to obtain their major adverse cardiovascular and cerebrovascular events (MACCE) via EHRs or telephone questionnaires.

The endpoints were the in-hospital mortality and MACCE during follow-up.

Categorical variables were expressed as counts and percentages, and the Chi-square or Fisher’s Exact test were used to perform group comparisons. Kolmogorov Smirnov test was used for evaluation of the normality of continuous variables. Variables with normal distribution were expressed as mean ± SD and group comparisons were performed using Student t-test. Variables with non-normal distribution were expressed as median (IQR) and analysed by using Mann-Whitney U-test. The Kaplan-Meier method was used to calculate cumulative event rates, which were compared between the groups using the log-rank test. All the statistical tests were two-tailed, and a p-value <0.05 was considered to be statistically significant. The data analysis was performed using the SPSS version 26.0 statistical software, the Kaplan-Meier survival curve was plotted using the GraphPad Prism 8 software.

Table I: Baseline characteristics of the study population.

The baseline characteristics, diagnosis and treatment of the study population are listed in Table I. Compared with older patients, younger patients were more often males, more likely to smoke, more likely to be treated with primary PCI (p=0.005) and had higher levels of triglycerides (TG) (p<0.001), TC (p<0.001), LDL-C (p<0.001) and uric acid (p<0.001). In addition, younger patients had lower levels of high-density lipoprotein cholesterol (HDL-C) (p=0.005) and were less likely to have multi-vessel coronary disease (p=0.010).

The subgroup analysis showed that in younger patients, more male patients had at least one SMuRFs than women (91.6% vs. 74.1%, p=0.011). SMuRFs of younger male patients were still mainly current smoking (69.3%), hypertension (37.4%), and hypercholesterolemia (36.9%), while hypertension (51.5%) and hypercholesterolemia (29.6%) were the most prevalent SMuRFs in younger women patients (Table II). 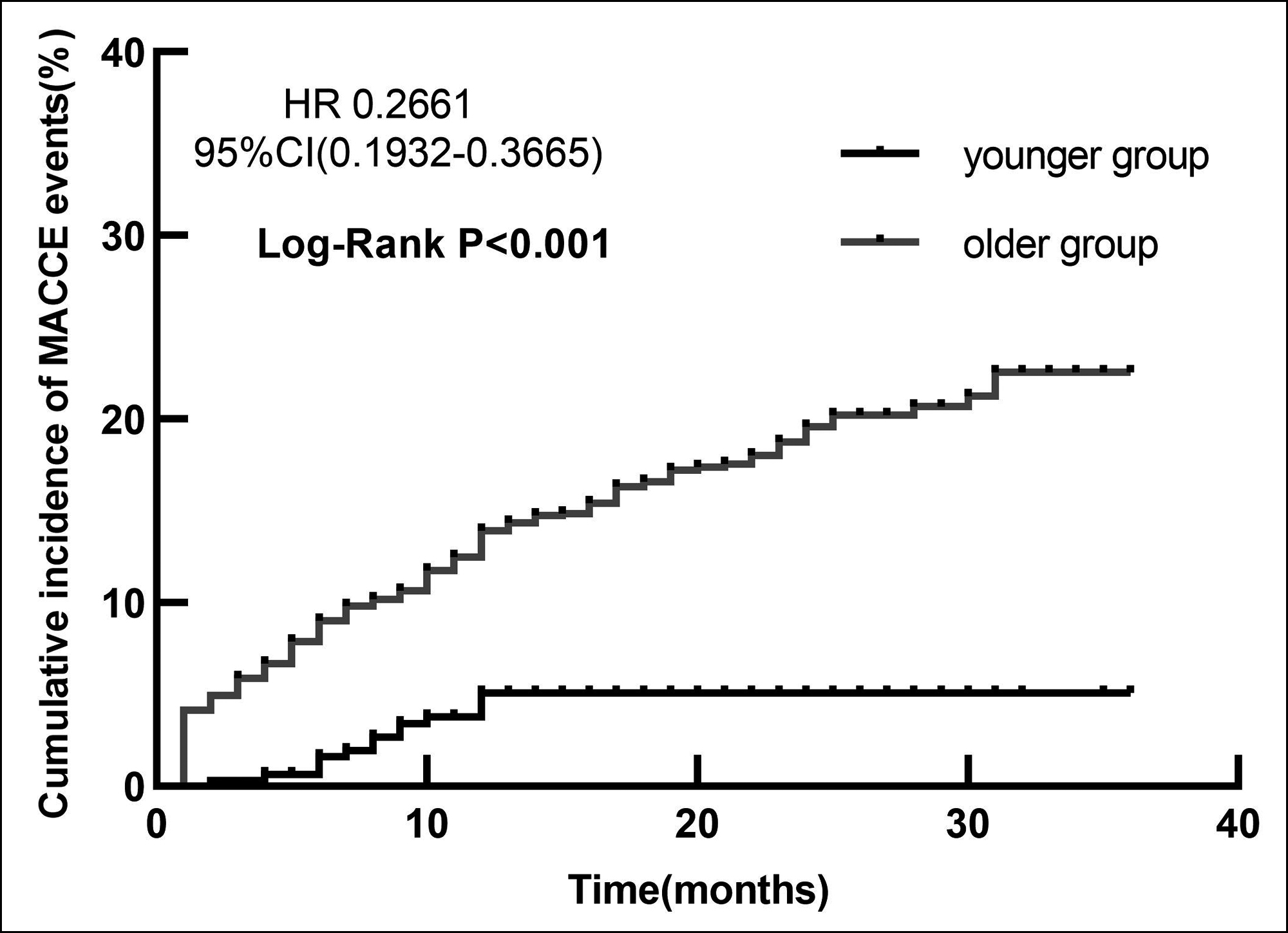 Figure 1: The cumulative incidence of MACCE in the younger group and older group.
MACCE = Major adverse cardiovascular and cerebrovascular events.

In consistence with previously reported results,9,10 this study found a higher proportion of male patients in the group of younger patients than that in the older patients’ group. In the younger patients’ group, male ACS patients accounted for 89.8%, much higher than female patients. This large difference may be due to many reasons. Men have a higher burden of smoking exposure than women. According to serial cross-sectional National Health Service Surveys in China, smoking prevalence in men was 47.2% (46.9-47.5) in 2013, much higher than the 2.7% (2.6-2.8) in women.11 Another study has shown that the onset of ACS in smokers is earlier than that in non-smokers.12 Men have higher levels of exposure to dyslipidemia compared with women. Studies have shown that in young people, premenopausal women have lower blood lipid levels than men of the same age.13,14

Different from previous studies,15 this study found that the proportion of younger patients receiving primary PCI was higher than that of older patients. This may be due to the high prevalence of STEMI in the younger group compared with the older group. Studies have found that the proportion of STEMI patients receiving PCI was much higher than that of NSTEMI patients.16

More than two-thirds of the younger male patients in the study were active smokers, while hypertension and diabetes were more common in younger female patients. In general, younger male patients had a heavier burden of SMuRFs than female patients. Compared with other SMuRFs, current smoking was the most easily controlled modifiable risk factor; quitting smoking reduced the individual’s mortality risk in patients with CHD by about 36%.20 The EUROASPIRE IV survey reported that about 90% of CHD patients in 24 European countries received smoking cessation interventions.21 Another survey showed that in recent years, the proportion of ACS patients receiving smoking cessation intervention in the United States has been maintained at nearly 100%.22 However, the Improving Care for Cardiovascular Disease in China-Acute Coronary Syndrome Project reported that only 35.3% of ACS patients received smoking cessation intervention before being discharged,12 which is much lower than that of CHD patients in other countries. Therefore, for younger male patients with ACS, more attention should be paid to control smoking in secondary prevention.

Both short- and long-term outcomes in the younger group were better than those in the older group. However, the in-hospital mortality in young patients was still 2.2%, and the cumulative MACCE rate during follow-up was 4.4%. It was reported by a national cohort study in Norway that the incidence of AMI was lower in younger people, however, during 2.4 years of follow-up, of every 10 AMI patients younger than 45 years, one died or experienced a new cardiovascular event.15 A study in China showed that younger patients with AMI had a higher incidence of bleeding events within 5 years compared with older patients.23 In people younger than 50 years old, ACS has a great impact on the patients' mental health and work ability and may impose a sizeable burden on family and society. Therefore, the prevention and treatment measures should be strengthened to further improve the quality of life and prognosis of younger patients with ACS.

Firstly, the sample size of younger ACS patients was small, and the study results may be biased. Secondly, the small number of young women makes it impossible to analyse gender differences in the clinical outcomes among young patients. Finally, the rate of loss to follow-up (LTFU) is high, so the follow-up results may be biased.

ACKNOWLEDGEMENT:
The authors would like to thank the Science and Technology Department of Sichuan, China for their support. The authors also would like to express their gratitude to EditSprings (https://www.editsprings.com/) for the expert linguistic services provided.

ETHICAL APPROVAL:
The study was approved by the Medical Ethics Committee of the Third People's Hospital of Chengdu.