ABSTRACT
The objective of this study was to evaluate the role of Ruxolitinib in steroid-refractory graft versus host disease. This retrospective descriptive study was conducted from January 2018 to December 2021. A total of 157 patients underwent allogeneic stem cell transplants during the study period. Of these, 20 patients having steroid-refractory GVHD treated with Ruxolitinib were selected for the study. The primary endpoint was the overall response rate to Ruxolitinib measured at 4 weeks and 24 weeks for acute and chronic GVHD, respectively. The secondary endpoints were overall survival and failure-free survival. Of these 20 patients, 7 (35%) had acute GVHD, and 13 (65%) had chronic GVHD. Of acute GVHD, 2 (10%) had grade II, 4 (20%) had grade III, and 1 (5%) had grade IV acute GVHD. Of 13 patients with chronic GVHD, 7 (35%) had moderate and 6 (30%) had severe chronic GVHD. In steroid-refractory acute GVHD, the overall response rate to Ruxolitinib was 85.7%, and in chronic GVHD, it was 84.6%. The failure-free survival was 80% and overall survival was 85%. Adverse events of any grade occurred in 16 (80%) patients with grade III/IV adverse events in 4 (20%) patients only. The study showed that Ruxolitinib is a safe and effective second-line therapy for acute and chronic steroid-refractory GVHD.
Key Words: Ruxolitinib, GVHD, Allogeneic stem cell transplant.

Allogeneic hemopoietic stem cell transplant (HSCT) is a curative treatment for a large number of benign and malignant haematological disorders.1 GVHD is a potentially fatal complication of allogeneic HSCT and a leading cause of non-relapse mortality in allogeneic as well as haploidentical HSCT. It starts with priming of antigen-presenting cell (APCs) due to the damage-associated molecular patterns (DAMPS) and pathogen associated molecular patterns (PAMPS) released due to the tissue damage caused by the conditioning regimen to the host tissues. Then APCs interact with donor T-lymphocytes and become activated causing tissue infiltration and damage.2 The incidence of GVHD is determined by the several factors the most important being HLA mismatch between the recipient and donor.  The incidence of acute grade II-IV GVHD can range from 40 to 80% and that of chronic GVHD ranges from 30 to 70%. Despite colossal advances in the field of HSCT, there are limited options available for the treatment of GVHD once it has started.

The first-line therapy for GVHD remains high-dose steroids which is effective in only 50% of the cases. For the remaining 50% steroid-resistant cases, a large number of second-line therapies are used one after the other, and JAK inhibitors are one of them.

JAK inhibitors are orally active small molecule inhibitors of Janus Kinases which have been shown to be effective in the management of acute as well as chronic GVHD. These drugs act by interrupting the signal transduction and transcription, thus preventing cell proliferation and inflammation. Ruxolitinib has been an effective second-line treatment option in GVHD with its unique capability of ameliorating GVHD while retaining the GVL effect. It has been used as a steroid-sparing agent in the steroid-dependent GVHD.3

The use of high-dose steroids is marred with an increased risk of CMV, tuberculosis, and fungal infections which are particularly high in our part of the world. Thus, every effort is made to use alternative second-line therapies with less risk of infections while sparing the GVL effect. In this study, we analysed the role of JAK inhibitor Ruxolitinib in steroid-refractory acute and chronic GVHD.

This was a retrospective study conducted at the Armed Forces Bone Marrow Transplant Centre / National Institute of Bone Marrow Transplant (AFBMTC/NIBMT), from January 2018 to Dec 2021. Acute GVHD was defined and classified as per the Mount Sinai Acute GVHD International Consortium (MAGIC) criteria. Chronic GVHD was defined and graded as per the National Institute of Health (NIH) 2014 criteria. Steroid refractoriness was defined as per the NIH-EBMT-CIBMTR Task Force criteria for acute and chronic GVHD.4 Inclusion criteria were patients with steroid-refractory acute or chronic GVHD receiving Ruxolitinib for at least 4 weeks in acute and 12 weeks in chronic GVHD, respectively. Exclusion criteria was intolerance to Ruxolitinib causing discontinuation of therapy.

The primary endpoint was overall response rate (ORR) defined as complete or partial response and was measured at 28 days of the Ruxolitinib treatment for acute GVHD and at 24 weeks for chronic GVHD. The secondary endpoints included overall survival (OS defined as time from transplant till death) and failure-free survival (FFS defined as occurrence of death, relapse of GVHD or need for the new systemic treatment for GVHD, whichever occurred first).5 Complete response (CR) was defined as resolution of all the manifestations of GVHD and partial response was defined as improvement in GVHD stage in all initial GVHD target organs without complete resolution or worsening. Data were analysed by the Statistical Package for Social Sciences (SPSS) version 20 using chi-square test for analysing the impact of categorical variables on ORR, and survival was calculated using Kaplan-Meier estimate with log-rank test, categorical variables were expressed as counts and percentages.

A total of 153 patients underwent allogeneic HSCT during the study period, out of which 20 were included in the study as per inclusion criteria. Patient characteristics, primary diagnosis, and study outcomes are shown in Table I. 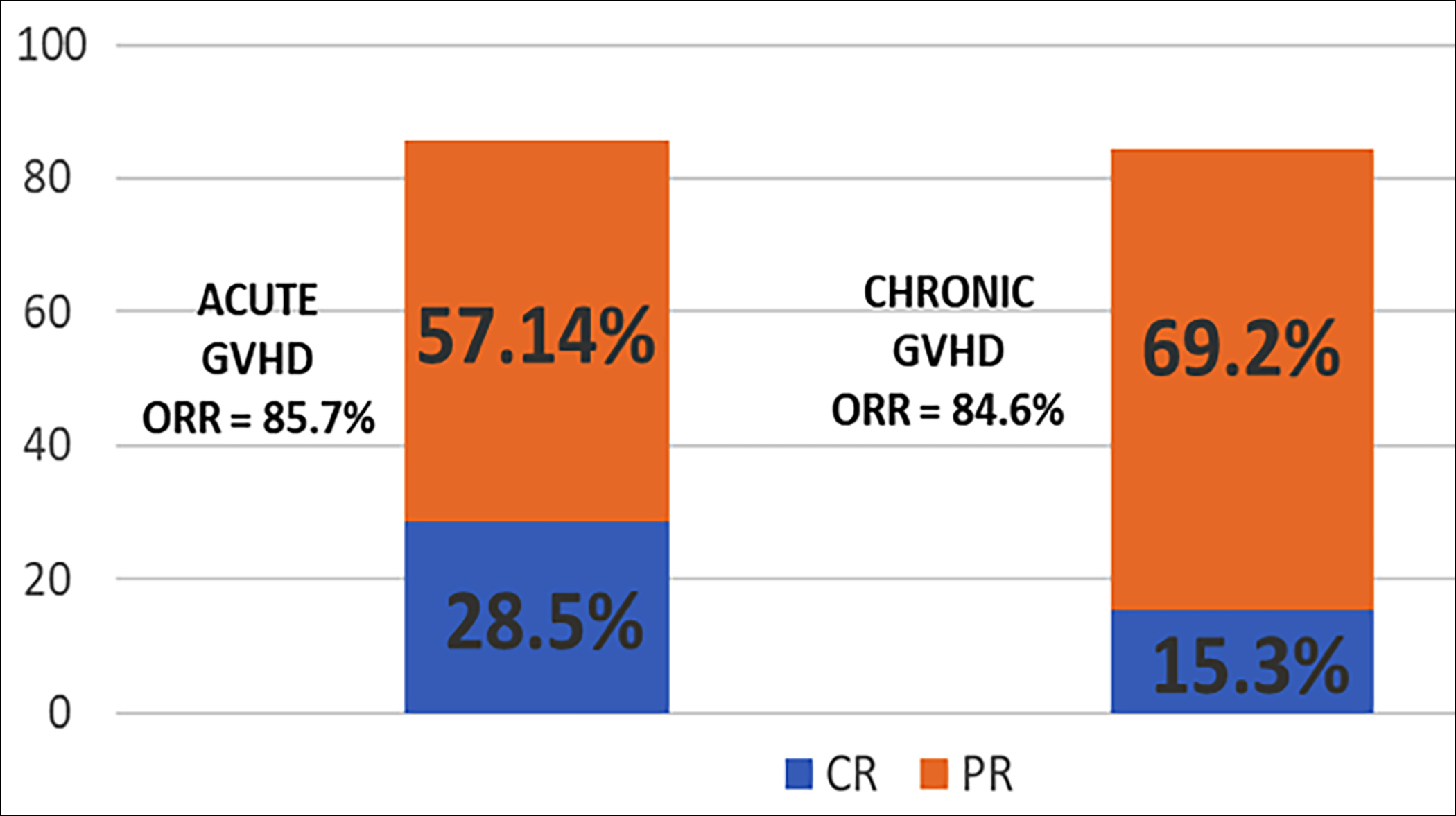 The median duration of therapy in the acute group was 60 days, and the median duration of therapy in the chronic group was 180 days. Adverse events of any grade occurred in 16 (80%) patients with grade III/IV adverse events in 4 (20%) patients only. The most common adverse effects were thrombocytopenia (30%), anaemia (20%), CMV reactivation (20%), fungal infection (10%), and tuberculosis (5%). However, there was no treatment discontinuation due to the adverse events related to the Ruxolitinib therapy.

This was a retrospective analysis on the use of Ruxolitinib in steroid-refractory acute and chronic GVHD. Ruxolitinib was the first JAK1/2 inhibitor given FDA approval in 2011 for primary myelofibrosis based on COMFORT-I and COMFORT-II trials and later for polycythemia vera in 2014 for patients intolerant or resistant to hydroxyurea. The role of Ruxolitinib was further explored in GVHD considering its myriad effects in signal transduction leading to cell proliferation and inflammation.

The youngest age in this study was 2 years, and there were no safety concerns; as shown by Khandelwal et al. in their study of Ruxolitinib in pediatric steroid-refractory acute GVHD.6

The record regarding adverse events showed that Ruxolitinib has an acceptable safety profile. Although this study has shown much superior ORR compared to the REACH studies, the sample size was small, and follow-up was shorter. Further evaluation in a randomised trial, with the larger number of patients is needed to confirm these findings.

The data shows that Ruxolitinib is an effective and safe oral therapy for acute and chronic GVHD. It can be used as a second-line therapy in steroid-refractory disease as it improves overall response and avoids complications of long-term steroid use.

PATIENTS’ CONSENT:
This is a retrospective study; therefore, patients’ consent is not required.

AUTHORS’ CONTRIBUTION:
HJ: Drafting the study, data analysis, and interpretation.
QUNC: Conception of work, critical revision, and final approval.
NS, MAK: Design and methodology of the study.
RI: Revising the study, data analysis, and interpretation.
MY: Data acquisition and analysis.
All the authors have approved the final version of the manuscript to be published.