Posterior reversible encephalopathy syndrome (PRES) is a neurotoxic condition with the non-specific neurological symptoms. The diagnosis is often delayed, as PRES is less common and less known than other cranial pathologies.1 Neurological sequelae may follow PRES cases where early diagnosis cannot be performed. The typical brain magnetic resonance imaging (MRI) findings are helpful in the diagnosis.2 The attention was drawn to this issue by a case of PRES diagnosed with the typical neuroimaging findings.

A 52-year female was admitted to our emergency department with headaches and seizures for a few days. Her relatives stated that the patient had seizures in the form of convulsions in the whole body that lasted for about one minute. Also, she had a headache for the last few days. She only had a chronic iron deficiency in her history, and she did not use any medication regularly. Upon physical examination, the patient was in the postictal phase. Motor examination of all the extremities was normal, and no signs of meningeal irritation were observed. The arterial blood pressure of the patient was 175/96 mmHg, pulse was 111 beats/minute, pulse oxygen saturation was 94%, body temperature was 36.6°C, fingertip blood glucose was 143 mg/dl, and electrocardiography was sinus rhythm.

Haemorrhagic and ischemic stroke, sinus vein thrombosis, central nervous system (CNS) infection, and status epilepticus were initially considered. Brain computed tomography, brain diffusion, and contrast-enhanced MRI, MR venography, lumbar puncture, and electroencephalography were performed, and none of the pathologies mentioned above was detected. A senior emergency physician re-evaluated the imaging findings of the patient. Hyperintense lesions in the parieto-occipital region of the T2-weighted MRI of the brain of the patient and fluid-attenuated inversion recovery (FLAIR) sequences were thought to be typical of PRES (Figure 1). She was hospitalised with a preliminary diagnosis of PRES. The culture and polymerase chain reaction tests (e.g. herpes simplex virus, echovirus, enterovirus, varicella-zoster virus, and cytomegalovirus) on cerebrospinal fluid were negative. Immunosuppression, sepsis, renal, hepatic, and cardiac failure were excluded. The cause of PRES was considered hypertension, as the patient was hypertensive during follow-up. Amlodipine (5 mg peroral once daily) and levetiracetam (500 mg peroral twice daily) were started. The patient was discharged with clinical recovery. 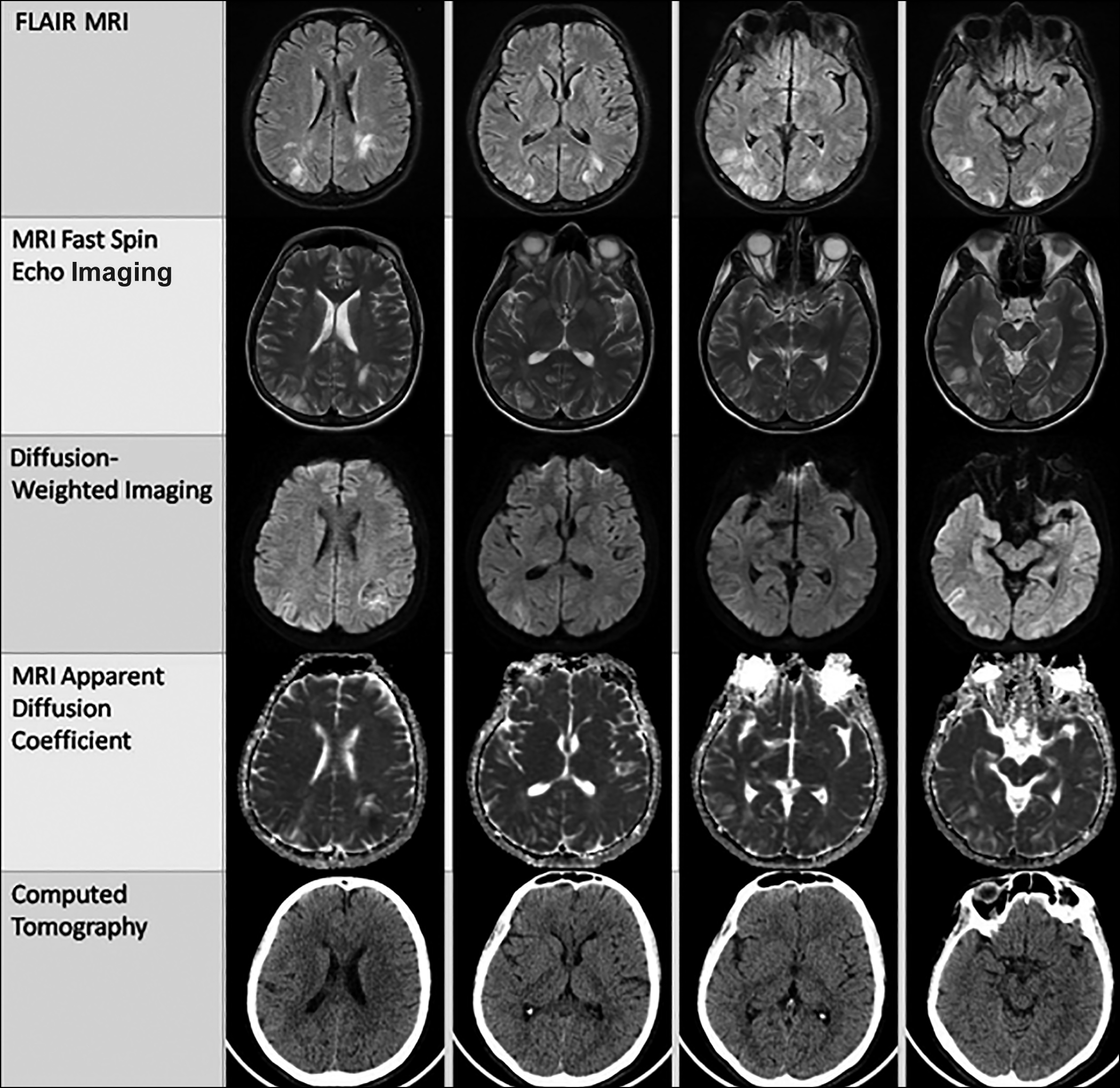 Figure 1: Brain magnetic resonance imaging and computed tomography findings of the patient. In fluid-attenuated inversion recovery (FLAIR) and fast spin-echo sequences, increased T2 signals were observed in both parieto-occipital regions, indicating vasogenic oedema in the cortical-subcortical area. Also, mild diffusion restriction areas in the left parieto-occipital region were observed in diffusion-weighted and apparent diffusion coefficient sequences. Also, it was observed that there was no pathology in the computerised tomography.

Figure 2: On the 30th day of the follow-up of the patient, it was indicated in the MRI that pathological findings regressed.

After the 30-day hospital follow-up of the patient, regression was observed in brain MR imaging (Figure 2). Although the pathophysiology of PRES has not been fully elucidated, it has been suggested that the blood-brain barrier is disrupted due to the increased blood pressure breaking down cerebral blood-flow autoregulation, which causes vasogenic oedema.3 The characteristic accumulation of vasogenic oedema in the posterior cerebral circulation causes typical imaging findings. It typically occurs as a hyperintense appearance in the parieto-occipital region on the T2-weighted MRI and FLAIR sequences. In some cases, diffusion restrictions on diffusion-weighted imaging or intracranial haemorrhages on computed tomography have been reported.4 Mild diffusion restriction was observed in the left parietal area of the brain of this patient, in addition to typical parieto-occipital hyperintensity. It has been reported that mortality and morbidity decrease in PRES patients diagnosed early with the help of typical neuroradiological findings.5

We want to emphasise the importance of the typical neuroradiology of PRES because the differential diagnosis range is extensive.

PATIENT’S CONSENT:
Informed consent was obtained from the patient for the use of all the information and images.