Importance of Susceptibility-weighted-imaging in Methanol Toxicity

ABSTRACT
Methanol poisoning is a rare but potentially lethal condition. Haemorrhagic necrosis of bilateral basal ganglia, particularly of the putamen, is one of the distinctive features of this entity. One of the proposed responsible mechanisms for putaminal haemorrhagic necrosis due to methanol toxicity is inadequate venous drainage of this region. Advanced imaging modalities are used to guide diagnosis and patient management. Here, we report a 61-year man who had a fulminant acute methanol toxicity due to accidental ingestion. Susceptibility-weighted-imaging (SWI) showed marked bilateral basal ganglia and brainstem haemorrhage. Also, congested and dilated venous structures were detected in SWI, which may be an indirect sign of inadequate venous drainage of this region. We intend to present the cerebral SWI features of a patient with fulminant methanol toxicity in order to clarify the underlying physiopathology of the brain damage, which has not yet been presented in the literature to the best of our knowledge.

Methanol intoxication is a relatively uncommon condition which may cause coma and death. Mortality rates have been reported to be as high as 54.3%, whereas related sequelae range from 10 to 34%.1,2 Patients typically suffer from visual impairment, drowsiness, seizures, and loss of consciousness. The main regions affected are the basal ganglia, occipital lobe, and optic nerves. Imaging modalities, especially MRI, are utilised in follow-up and management.

An unconscious 61-year man was brought to the emergency room by his relatives. He consumed 500 ml of alcohol of unidentified origin approximately seven hours back and started complaining of blurry vision two hours ago.

At the time of admission, he was tachycardic, 124 beats/minute, hypoxic, SpO2: 88% and dyspneic. His Glasgow Coma Score (GCS) was 3. After blood gas analysis revealed a state of high anion gap metabolic acidosis (pH = 7.10), a diagnosis of methanol intoxication was quickly suspected. The patient was admitted to the intensive care unit and relevant blood and urine samples were taken for analysis. His blood workup identified a decreased eGFR = 61 ml/min/1.73 m2, elevated liver enzymes, AST = 99 U/L and ALT = 81 U/L, Glucose = 289 mg/dl and impaired coagulation parameters with INR = 1.87, and aPTT = 86.3 s. The rest of the laboratory studies were normal. In the ocular examination, his eyes were unresponsive to light and he had bilateral pupil oedema. The patient was intubated and mechanical ventilation assistance was provided. After toxicology assay detected unusually high levels of methanol (84.8 mg/dl), the patient was started on hemodialysis (10,000 ml/h) and IV ethanol admission to competitively inhibit alcohol dehydrogenase, thus reducing formic acid production, the main reason of methanol toxicity (3.26 mg/kg/s). He also received repeated doses of HCO3 to counter metabolic acidosis and norepinephrine infusion to provide hemodynamic stability. Despite close monitoring and proper treatment, the patient showed no signs of recovery and passed away seven days after admission.

On the fifth day of treatment, a cranial MRI with an additional SWI sequence was acquired. Hemispheric sulci were obliterated and could not be identified on both sides. Gray and white matter could not be differentiated. T1-weighted images showed hyperintensities in bilateral basal ganglia, suggesting haemorrhage, more prominent on the right side. On T2-weighted images, a low parenchymal intensity compatible with “Dark Brain” appearance was detected (Figure 1a). Subfalcine herniation was present. Brainstem had been pushed anteriorly and compressed. Cerebellar tonsils herniated through foramen magnum into the spinal canal. CSF space around the herniation was notably reduced. Superior sagittal sinus and lateral sinuses were thrombosed. Left internal carotid artery, beyond its cavernous segment, showed a filling defect consistent with thrombosis. Areas of central diffusion restriction, due to haemorrhage of bilateral basal ganglia, and peripheral diffusion increase, due to parenchymal oedema were observed. Widespread parenchymal diffusion restriction in cerebellar hemisphere and supratentorial regions was also noted in diffusion weighted-imaging. SWI sequences marked a signal intensity loss at brainstem and basal ganglia consistent with haemorrhage. Congested and dilated venous structures at both hemispheres were observed (Figures 1b, 1c, 2a, and 2b). Prominent pial collateralisation in the bilateral cerebral hemispheres was also noted. The severity of the imaging findings indicated a poor diagnosis. Figure 1a: T2-weighted imaging showing hypointense lesions in the basal ganglia prominently on the right side in keeping with haematoma. A “dark brain” appearance indicating cerebral oedema and midline shift towards the left are also noted on the same image. Figure 1b, 1c: MIP and phase images of susceptibility-weighted-imaging (SWI) sequence showing signal loss and susceptibility artefact in basal ganglia along with dilation and congestion in cerebral venous structures. 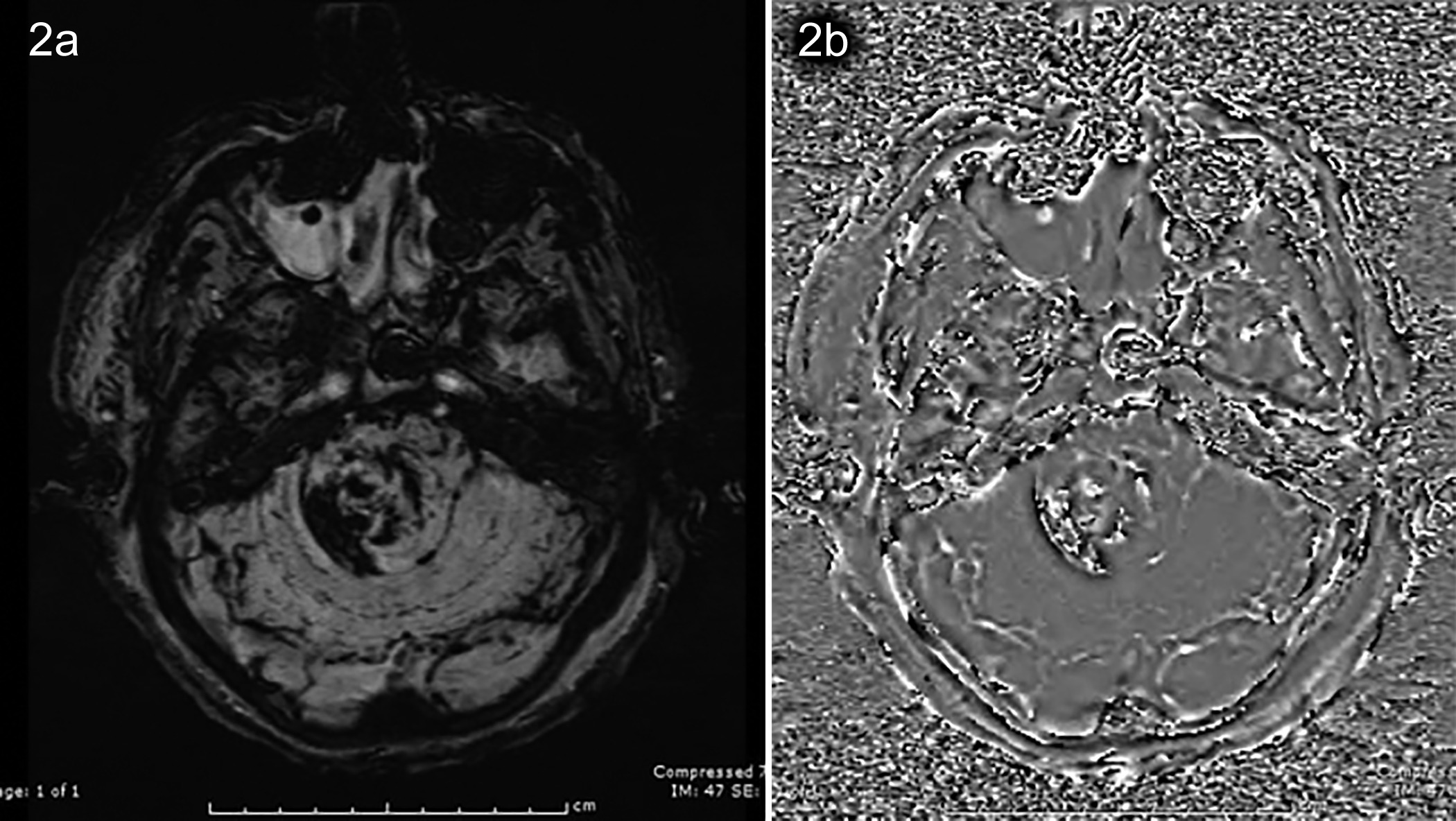 Figure 2a, 2b: Susceptibility artefacts in susceptibility-weighted-imaging (SWI) and phase images indicating haemorrhage in the brainstem.

Imaging studies are used to support, but not to confirm the diagnosis of methanol toxicity. Bilateral putaminal necrosis is not pathognomonic of methanol toxicity and can also be observed in Wilson's disease, mitochondrial diseases, cyanide toxicity, and hypoxic damage.3-5

The extent of permanent damage to the central nervous system (CNS), retina and optic nerves is related to the amount of methanol ingested. Methanol causes toxicity in two steps. First, methanol itself causes CNS depression in the same way as ethanol. Secondly, its metabolite, formic acid, inhibits mitochondrial cytochrome C oxidase, thus inciting hypoxia at a cellular level.6 It is known that basal ganglia, part of the deep grey matter, are more susceptible to hypoxic encephalopathy due to their high energy consumption. Cerebral damage takes place most commonly in the form of haemorrhagic necrotic lesions in the basal ganglia. Necrotic lesions are also found in subcortical grey and white matter, especially frontal and occipital lobes, cerebellum, and optic nerves.7 Hemodialysis may increase haemorrhagic risk.8 In this case, the patient was started on hemodialysis as soon as methanol toxicity was affirmed. On the fifth day of hemodialysis, basal ganglia and brainstem haemorrhage were detected on MRI. Haemorrhagic necrosis was more pronounced in the putamen.

There is no consensus on mechanisms which explain the underlying physiopathology of putaminal haemorrhagic necrosis due to methanol toxicity. Several different hypotheses are proposed. The most widely accepted view is that it may be due to higher energy consumption in contrast to other parts of the brain. Higher energy consumption might lead to a greater accumulation of formic acid in the putamen, hence causing necrosis.9 Another proposed mechanism responsible for putaminal haemorrhagic necrosis is inadequate venous drainage of this region.10 In the present case, there were areas of haemorrhage in the basal ganglia and brainstem. Also, marked venous congestion in bilateral cerebral hemispheres was observed in SWI despite there being no signs of it in conventional MRI. In addition, the superior sagittal sinus and lateral sinuses were also thrombosed. Our SWI findings support and emphasise the role of inadequate venous drainage besides the intense energy consumption of putamen. SWI features may explain the relation between putaminal haemorrhagic necrosis and poor venous drainage of the putamen.

In cases of suspected methanol toxicity, SWI could provide invaluable information in evaluating cerebral venous drainage. It will guide us by providing a better diagnosis, treatment and management plan in cases of methanol toxicity.

PATIENT’S CONSENT:
Informed consent was obtained from the patient’s family to publish the data concerning this case.

AUTHORS’ CONTRIBUTION:
FA, AK, DHK, AA: Identification and follow-up of the case, drafting the manuscript and its revision.
All the authors have approved the final version of the manuscript to be published.