ABSTRACT
Hyperthyroidism is associated with a number of heart diseases, and it may aggravate previous cardiac problems or cause new ones, such as hyperthyroid cardiopathy. Cases of hyperthyroidism presenting with coronary vasospasm are rarely reported. Herein, we present a case of a 54-year male patient with recurrent left chest pain for 2 months. Coronary angiography showed no obvious coronary artery stenosis, and coronary vasospasm was suspected. After admission, the patient's thyroid function and TSH-receptor antibody (TRAb) were abnormal. However, there was no obvious palpitation, hyperhidrosis, or weight loss, and the diagnosis of Graves' disease was rendered, which seemed to be the cause of coronary vasospasm. The patient did not experience chest pain after treatment with methimazole. Patients with coronary vasospasm should be investigated for the possibility of hyperthyroidism.

A 54-year male patient presented with the chief complaint of pain in the left anterior heart area without obvious precipitating factors, accompanied by chest tightness, sweating, discomfort in the back, and no radiating pain in the left upper limb. The symptoms lasted for about 20 minutes.

The  patient’s  enhanced  chest  CT  showed  no  significant  abnormality.  Coronary  angiography  showed coronary  atherosclerosis  without  obvious  stenosis  (Figure 1).  The  patient's  thyroid  dysfunction  was  not  detected  at this  time.  The  patient  was  diagnosed  with  coronary  vasospasm  and  was  treated  with  oral  diltiazem.

Two months later, the patient had a second attack of chest pain without obvious precipitating factors. With the same symptoms as before, he was admitted to the hospital after two days. The patient had no obvious symptoms of hyperthyroidism, such as palpitations, hyperhidrosis, or weight loss. The patient had a history of hypertension for more than 10 years and was treated with valsartan, and he had no history of diabetes or coronary heart disease. On examination, the patient’s blood pressure was 130/80 mmHg with the heart rate of 116 beats/min and a regular heart rhythm. The patient had tremors in both hands (+), no swelling in eyelids, and mild protrusion of both eyes. Neck examination revealed mild swelling of both lobes of thyroid. There was no oedema in the lower limbs. 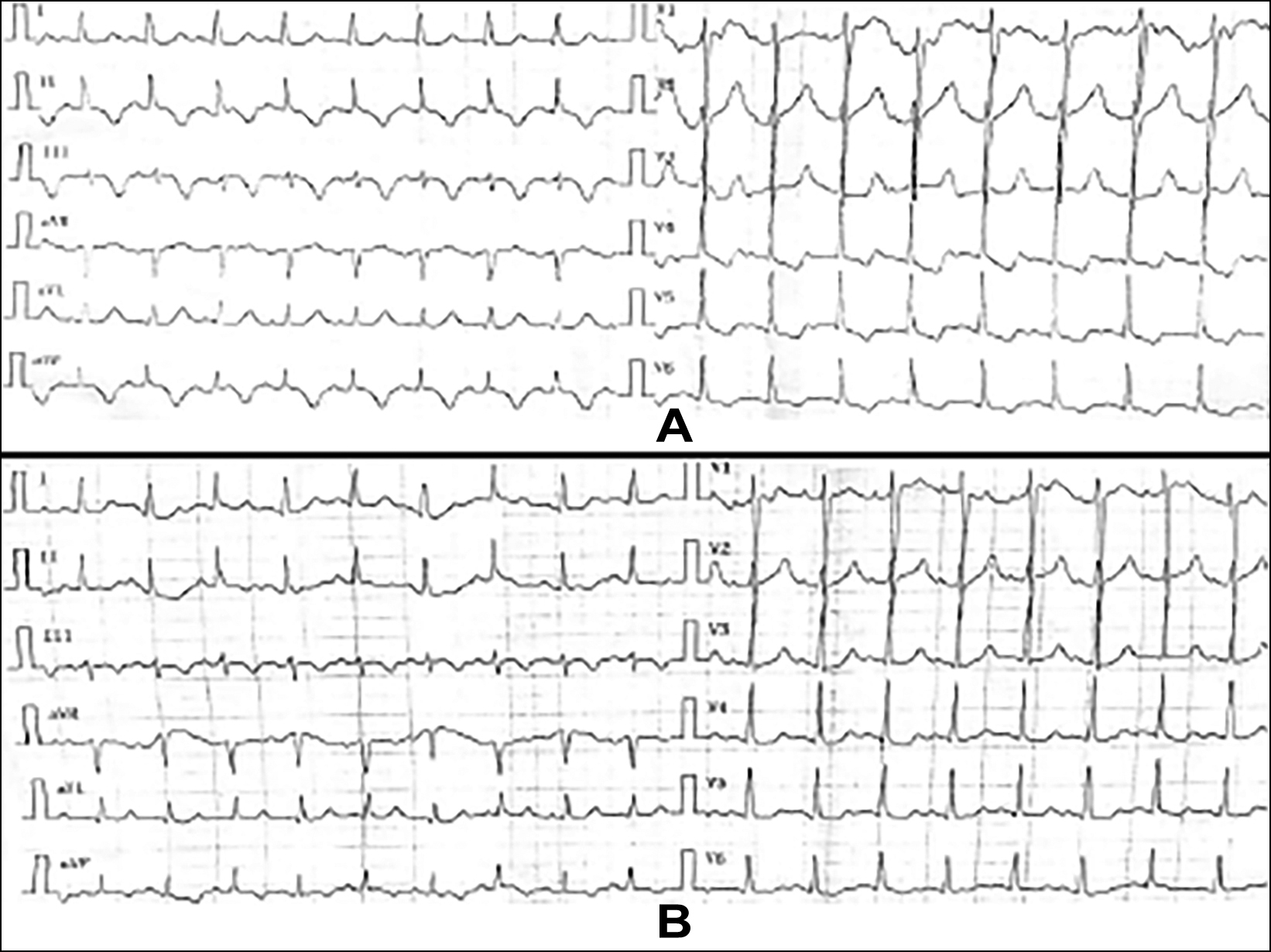 On the evening of admission day, the patient complained of chest pain again. Serum troponin I was up to 0.905 ng/ml (normal: 0-0.028) and creatine kinase isoenzyme was 24.0 U/L (normal: 30-135). The patient's electrocardiogram (ECG) showed T wave inversion (lead II, I II, AVF, V4-V6) and dynamic changes (Figure 2). The patient was diagnosed with non-ST segment elevation myocardial infarction, and he was treated with antiplatelet agents, vascular plaque stabilisation, anticoagulation, and improvement of myocardial blood supply. Other blood test results are listed in Table I. Thyroid color doppler ultrasound showed enlarged thyroid with uneven echos. Two ECG examinations indicated atrial fibrillation and atrial flutter, respectively. The patient was treated with methimazole and diltiazem. After treatment, there was no recurrence of chest pain. The discharge diagnosis was acute coronary syndrome, coronary vasospasm, Graves' disease, hyperthyroid heart disease, paroxysmal atrial fibrillation, hypertension, diabetes, and hypokalemia. After 3 months of treatment, thyroid function showed TSH of 0.56 mIU/L, free T3: 6.21 pmol/L, and free T4:17.28 pmol/L. The patient had no more episodes of chest pain. The ECG did not show atrial fibrillation or atrial flutter. Methimazole was reduced to 10 mg daily.

We presented the case of a middle-aged man who had chest pain two months before recent admission, but the symptoms of hyperthyroidism were not obvious at that time. The patient was diagnosed with coronary vasospasm by coronary angiography. After admission, due to thyroid dysfunction and high TRAb levels, Graves' disease was clearly diagnosed. Through treatment, the patient had no recurrence of chest pain, and coronary vasospasm was considered to be related to Graves' disease.

The mechanism through which hyperthyroidism causes coronary spasm is not fully understood. The important pathophysiological mechanisms include abnormal changes in the autonomic tone of coronary arteries and hyperreactivity of vascular endothelium. Firstly, thyroid hormones can cause an increase in blood levels of epinephrine. Secondly, thyroid hormones can increase the sensitivity of coronary arteries to catecholamines and serotonin, thereby causing coronary artery spasm.2,4

Coronary vasospasm induced by hyperthyroidism is closely related to elevated thyroid hormones in patients. Therefore, measures should be taken to reduce the thyroid hormone levels as soon as possible. However, surgery and isotope therapy may cause a short-term rise in thyroid hormones because of damage to thyroid tissue, which is not recommended. Data supports use of nitrates and calcium channel blockers rather than beta-blockers due to the possibility of alpha-adrenergic stimulation and subsequent enhanced coronary vasoconstriction.5

ACKNOWLEDGEMENTS:
We thank NedMedic (www.Nedmedica.nl) for its linguistic assistance during the preparation of this manuscript.

PATIENT’S CONSENT:
Written consent was obtained from the patient.

AUTHORS’ CONTRIBUTION:
CM: Designed and authored the manuscript.
WYW, YZ: Data collection and literature review.
DCL: Contributed in analysis, acquisition, revision, and final proof.
XLM: Study supervision.
All the authors have approved the final version of the manuscript to be published.