Lung cancer causes more than 1 million deaths each year, and is the leading cause of cancer-related death.1 In recent years, the prolongation of human life expectancy has led to an increase in cancer cases. Although, approximately half of the patients with cancer are seen in older people aged >65 years, adenocarcinoma histological subtype has begun to be seen frequently in young women, recently.2

Approximately 70% of patients have advanced disease stage at the time of diagnosis, and the 5-year survival rate of patients with lung cancer is 15%.3,4 Identifying most patients with metastatic-advanced stage is still the most important reason for the recent high mortality rate. The National Comprehensive Cancer Network 2017 guidelines recommended that patients who had risk factors such as being >55 years and had a smoking history of ≥30 pack-years should be screened by thoracic computed tomography (CT) with low-dose radiation for early diagnosis.5

In past years, some traditional imaging methods such as CT, magnetic resonance imaging, and scintigraphy were used for staging of patients with lung cancer. Recently, F-18 fluoro-deoxyglucose (FDG) positron emission tomography (PET)/CT method allows staging of the whole body simultaneously, and reflects both the anatomical and metabolic status of the tumour; and its metastasis, which has been increasingly used. Accordingly, it has become possible to easily detect metastatic diseases by PET/CT, which cannot be detected by standard methods.6,7 Thus, the detection of the distant metastases and metastatic lymph nodes by PET/CT increased, and unnecessary thoracotomies decreased.8

The patient should be encouraged to quit smoking at any age or stage because the clinical course of those who quit smoking is better than those who continue to smoke.10,11

Knowledge of the distribution and localisation of the metastasis contributes significantly to the evaluation of clinical findings of uncertain cause and the choice of treatment, as well as of the treatment algorithms.12 Few studies have shown the distribution and frequency of distant metastasis at the time of diagnosis in lung cancer, according to age and histopathological subtypes.

Thus, this study aimed to evaluate the localisation and rate of distant metastasis by age and histopathological subtype in patients with newly diagnosed lung cancer.

Patients with lung cancer, diagnosed at Recep Tayyip Erdogan University, Rize, Turkey between December, 2018 and February, 2019, were evaluated retrospectively. Patients aged >18 years and diagnosed with primary lung cancer (NSCLC and SCLC) were included in this study. The exclusion criteria were as follows: received neoadjuvant or adjuvant therapy, underwent surgery before the PET/CT scan, and had brain metastases without another distant metastasis. Brain metastases were excluded from the evaluation in distant metastasis screening because of the limitations of PET/CT in detecting brain metastases.

Patients’ files and PET/CT images available in the hospital electronic medical records were examined. Age, gender, smoking history, histopathological subtype, stage and localisation of the lymph node and distant metastasis upon diagnosis were recorded. The staging of all patients was based on the 8th Tumour-Node-Metastases (TNM) staging system, according to the initial PET/CT scan.13 All patients with distant metastasis having 1–3 metastases, were evaluated as oligometastatic. Those with more than three metastases were evaluated as having a multiple metastatic disease.

Patients were grouped according to age (>65 and <65 years) and presence of distant metastasis. The age distribution of these variables, especially the current TNM stage of patients, and distribution of metastasis patterns, were examined. The effect of demographic and histopathological subtypes of patients on predicting metastatic disease was also evaluated.

All patients fasted for at least 6 hours before PET/CT. The fasting blood glucose levels of all patients were <200 mg/dL before scanning. Moreover, 220–370 MBq18F-FDG was administered intravenously to the patients. Contrast agent was given orally to all patients. Patients underwent PET/CT (Siemens Biograph mCT/20 slices) with three-dimensional mode and time-of-flight features, following a resting period of 60–70 min in the resting room. Images were acquired from the head to the upper thigh area. Low-dose CT data were collected at an average of 120 kV–50 mAs. PET images were obtained at a rate of 2 minutes per bed position.

A nuclear medicine physician with board certification visually and semi-quantitatively evaluated PET/CT images of all patients. The primary lesion size was measured in two dimensions in the axial plane on the fused PET/CT section. PET/CT images of all patients were evaluated in detail with respect to the chest wall, bone, adjacent great vessels and pleural invasion, which are the criteria for determining the T stage. Localisations of the lymph node and distant metastasis were noted.

Data analysis was performed using the SPSS version 25.0 statistical package. Kolmogorov–Smirnov test was conducted to determine whether the quantitative variables were normally distributed in the groups. The Chi-square analysis determined the dependence between the qualitative variables. Independent sample t-test and Mann–Whitney U-test were used for comparisons between the two independent groups, such as patients’ distant metastasis status by age groups, and smoking pack-years. Qualitative variables were given as a number (n) and percentage (%). Descriptive statistics on quantitative variables were given as median (25th–75th percentile) and mean ± SD. Factors that affected distant metastasis were analysed by univariate and multivariate analyses, using a logistic regression analysis. Multivariate analysis was used to treat variables that were found significant in the univariate analysis, and p <0.05 was considered significant.

A total of 152 patients, diagnosed with lung cancer who underwent PET/CT for initial staging, were evaluated retrospectively. The mean age was 66.7 ± 10.3 (range, 33–90) years. Moreover, 84 (55.3%) patients were aged >65 years, and 132 (86.8%) patients were males. The demographic data of all patients according to the distant metastasis status are summarised in Table I.

Table I: Demographic and clinical characteristics of patients with lung cancer, according to the distant metastasis status.
Table II: Univariate or multivariate logistic regression analysis of distant metastasis. 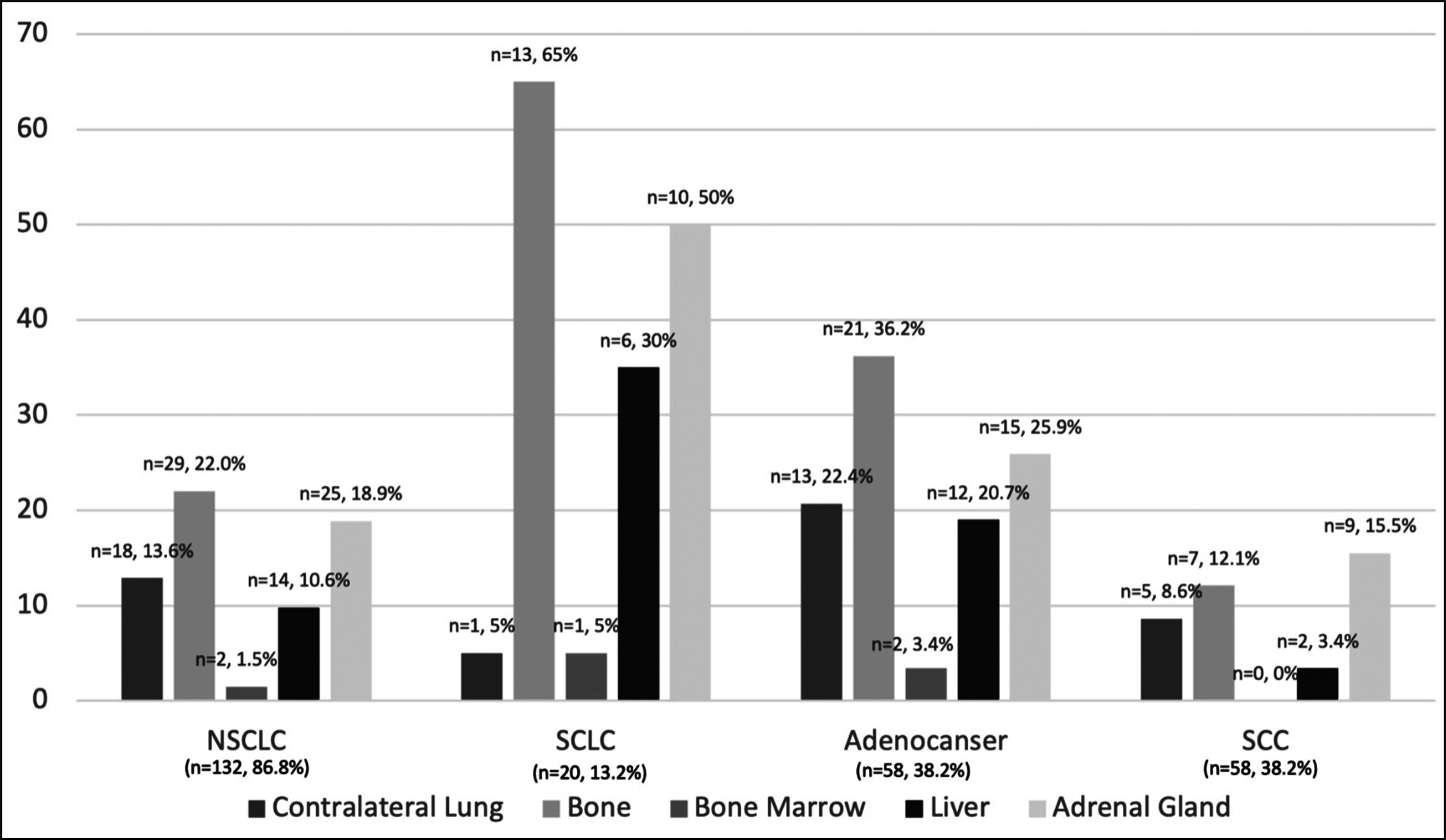 When distant metastasis patterns were examined, bone metastasis was the most common (n=42, 27.6%) in all patients. Only three patients (15%) with SCLC did not have distant metastasis, and 14 of the patients with distant metastasis (70%) had multiple metastatic disease. Of the patients with multiple metastatic diseases (n=46), 24 of them (52.2%) were diagnosed with adenocarcinoma, and 14 of them (30.4%) were diagnosed with SCLC. Looking at the relationship between localisations of distant metastasis with age groups, the authors found that the only contralateral lung metastasis was statistically different between the two age groups. Other organ metastases were similar in young and elderly patients. Contralateral lung metastasis was found to be significantly higher in young patients than in elderly [12 (17.6) vs 6 (7.1%), p=0.046]. A total of 31 (40.3%) patients presented with oligometastatic disease. The most common histopathological subtype was adenocarcinoma (n=14, 45.2%); and the secondly was SCC (n=13, 41.9%) in patients with oligometastasis. Distant metastasis patterns and distribution metastases are as follows: Adrenal gland 35 (23%), contraleteral lung 18 (11.8%), pleura 14 (9.2%), bone 42 (27.6%), liver 20 (13.1%), bone marrow 3 (2%), soft tissue 4 (2.6%), pancreas 3 (2%), periton 4 (2.6%), others. Twenty-one (13.8%) patients had distant metastasis with atypical localisation such as skin, testis, nasal cavity, abdominal, cervical, and axillary lymph node detected on PET/CT scan.

In this analysis of patients diagnosed with stage I–IV lung cancer, most patients had advanced stage disease confirmed by PET/CT. 18F-FDG PET/CT was performed to detect the presence of distant metastasis in all patients.

In this study, differences were found between the histopathological subgroups in the distribution pattern of distant metastasis. In contrast to the study conducted by Torok et al., the most common subtype with distant metastasis was SCLC, including adenocarcinoma.15 As possible reason for this difference, while Torok et al. included only the histopathological subtypes of NSCLC, patients with both NSCLC and SCLC were included in this study.

The present results showed that T4, N2, M1 and stage 4 diseases were more common in patients with lung cancer diagnosed at age ≤ 65 years, but no difference was found. Although no difference was noted between age groups with distant metastasis, distant metastasis detection rate was more common in patients aged ≤ 65 years at the time of diagnosis, similar to literatures.14,15 The lack of difference in this study may be related to the cut-off value, as patiewwwwnts were divided into two age groups. If the cut-off value was 60 years of age instead of 65 years, perhaps, there would be a significant difference between the two age groups.

Similar to previous studies, this study showed that the most common extranodal metastatic localisation is the bone (27.6%) in all patients.14,15 According to Riihimäki et al., the most common distant organ metastasis was brain, followed by the bone.14 These results are quite comparable because the authors excluded brain metastasis.15-18 While SCC is the most common subtype that causes adrenal gland metastases, the other three subtypes cause bone metastasis most frequently in the present study. Unlike the literature, patients with SCC had more adrenal gland metastases, whereas patients with other histopathological subtypes had more bone metastases. This result, which is different from the literature, is possibly due to the difference in the distribution of the ratio of histopathological subtypes and the exclusion of central nervous system involvement in distant metastasis evaluation.14

With improved treatment modalities and early diagnosis of patients, data on the increased cancer survival and development of distant metastasis have gained importance in recent years. Recognising patients at high risk of developing distant metastasis, especially those with lung cancer, where cancer-related deaths are the most common, the time of diagnosis is important. These patients should be screened for distant metastasis before starting treatment or surgery. PET/CT is recommended in many studies to detect occult locoregional metastasis and distant metastasis in patients with NSCLC.19 Many studies have demonstrated the success of FDG PET/CT in both NSCLC and SCLC in showing hidden metastases and in patient management.20-24 FDG PET/CT is the most appropriate imaging method for scanning the whole body at one time.

This study has a few limitations. Firstly, this study has a retrospective design, and the number of patients is limited. Thus, we could not evaluate different histopathological subtypes in separate groups. Secondly, although brain metastasis is quite common in lung cancer, the authors excluded the presence of brain metastasis because of the low sensitivity of PET/CT to detect brain metastasis. Finally, oligometastatic or multiple metastatic diseases were judged according to PET/CT findings, and histopathological sampling from metastatic foci was not performed.

ETHICAL APPROVAL:
The protocol for the current study was approved by the Ethics Committee of the Recep Tayyip Erdogan University (Approval No. 2021/16), and adhered to the principles of the Declaration of Helsinki.

PATIENTS' CONSENT:
Informed consents were taken from all patients before writing the article.