Digital Necrosis Due to Septic Embolism: An Unseen Complication of Gangrenous Cholecystitis

ABSTRACT
Gangrenous cholecystitis is one of the most severe complications of cholelithiasis. It causes serious morbidity and mortality. The main pathology in this complication is progressive vascular insufficiency, which may lead to necrosis and perforation of the gallbladder wall. Vascular insufficiency can affect other organs besides the gallbladder. Since its symptoms are not different from that of acute cholecystitis, delayed diagnosis and treatment can cause death. Treatment is a surgical intervention as soon as the diagnosis is made. Complications such as wound infection, intra-abdominal abscess, circulatory disorders, and lung problems can be seen in the postoperative period. Embolism and necrosis in distant organs as a complication of gangrenous cholecystitis have not been reported till date. In this case, we present a patient, who developed necrosis of the fingers and toes due to septic embolism as a complication of gangrenous cholecystitis.

Gangrenous cholecystitis is one of the most severe forms of acute cholecystitis and it can develop in 2-29% of patients with cholecystitis.1-3 It occurs with venous and arterial insufficiency followed by ischemia and necrosis as a result of the progression of inflammation in the gallbladder.4,5

Since most of the patients are of advanced age and have additional diseases such as hypertension, coronary artery disease, and diabetes mellitus that cause micro and macrocirculatory disturbances, vascular insufficiency can manifest its effects more easily in all organs and prepare the ground for complications.6

The circulatory disturbance in gangrenous cholecystitis patients can affect not only the gastrointestinal system but all systems.7 In addition to gangrene of the gallbladder, problems that have never been seen before such as embolism and necrosis in distant organs may occur.

In this case report, we present a male patient who developed digital necrosis due to septic embolism after gangrenous cholecystitis.

An 84-year male patient, with history of inguinal hernia surgery, hypertension for 25 years, and diabetes mellitus for 30 years, presented with a complaint of abdominal pain that was intermittent for about 1 year. The pain has gradually intensified over the past 1 week. He was admitted to the emergency service with the addition of nausea and vomiting to this condition. On physical examination, guarding and rebound tenderness was positive in the right upper quadrant. Vital signs showed fever of 38.2oC, pulse rate, 100/minute, blood pressure, 100/80 mmHG, and respiratory rate, 24/minute.

In imaging examinations, there was no significant finding on radiography of the chest and abdominal X-ray. In abdominal tomography investigation, free fluid was observed in perhepatic and persplenic areas, along with diffuse thickening of gallbladder wall. The wall thickness of the fundus was about 1.5 cm and there was wall irregularity. These findings were suspicious in terms of perforation (Figure 1a).

The patient was admitted to the surgical intensive care unit (SICU) with a preliminary diagnosis of gallbladder perforation, sepsis, and multi-organ failure. Intravenous (iv) hydration (1000 cc isotonic saline) and antibiotic treatment (Ceftriaxone, 2×1 g and Metronidazole, 3×500 mg) were started. He was later taken into operation; the abdomen was entered with the right subcostal incision. On exploration, the gallbladder was found to be gangrenous and there was one small perforation area in the fundus and minimal fluid around the gallbladder. Culture was taken from the fluid, and the patient underwent cholecystectomy procedure. After the site of the surgery was washed with plenty of isotonic saline, a drain was placed in the site and the layers were closed duly (Figure 1b). 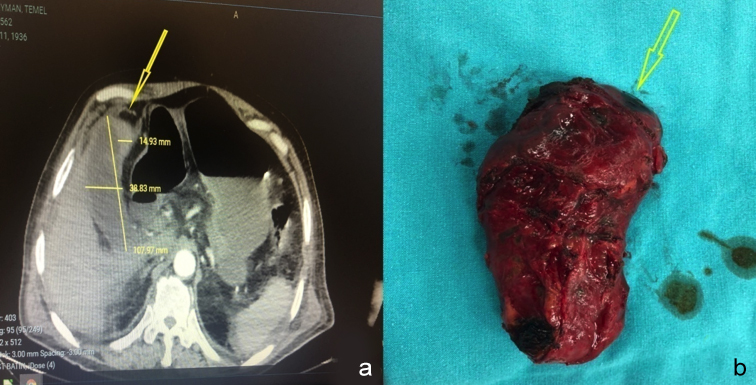 The patient continued to receive (iv) hydration (1500 cc isotonic saline and 1500 cc buffered 5% dextrose). After the growth of proteus mirabilis in the culture, antibiotic was changed to meropenem, 3×1 g. On the third post-operative day, bruises and color changes were noted on the patient's hands and feet, and consultation was requested from the cardiovascular surgery with a preliminary diagnosis of embolism. Cardiovascular surgery recommended heparinisation and follow-up of the patient because the patient's pulses were full and his extremities were hot; Clexane 0.4 cc (Enoxoparine sodium, anti-Xa /0.4 ml) was started subcutaneous. On 5th postoperative day, ischemia became prominent in the distal phalanges of fingers and toes and turned into necrosis (Figure 2). On reassessment of the patient, on doppler ultrasound requested by cardiovascular surgery, blood flow was not observed in multiple fingers and toes of both hands and feet (Figure 2) and cardiovascular surgery suggested amputation of necrotic finger and toe tips. The patient was referred to orthopaedic clinic for digital amputation. Necrotic ends of all digits were amputated. On 5th postoperative day, efflux ion started from the stumps of the patient's amputated fingers. Culture was sent, which grew Proteus mirabilis and Escherichia Coli. It was thought that the patient's condition occurred due to septic embolism. The antiriot therapy was changed again and Tazocin (piperacillin and tazobactam, 3×4.5 g) and Amikacin (amikacin sulfate, 1×1 g) were started. On follow-up, the general condition of the patient improved, and the drain of the patient was removed when nothing came from the abdominal drain. The efflux ion from the stump ceased on 15th postoperative day, and the patient, whose vital signs were stable and who was in good general condition, was discharged on the 21st day of hospitalisation.

Several predisposing factors play a role in the progression of patients with acute cholecystitis to gangrenous cholecystitis. These are the conditions which disturb the micro and macro- vascular circulation such as delayed surgery, advanced age, male gender, cardiovascular disease, and diabetes mellitus.8,9

Micro and macrovascular circulatory disorders in gangrenous cholecystitis cause additional problems in patients. In this case report, a serious complication, septic embolism leading to digital necrosis and amputation, was observed, which has not been reported previously.

On review of diseases causing digital necrosis in the literature, in a series of 23 patients, systemic lupus erythematous was implicated in 5 cases, Sjogren's syndrome in 4 cases, Behçet's disease in 3 cases, paraneoplastic syndrome due to thyroid malignancy in 1 case and scleroderma disease in 10 cases. No cases of cholecystitis were encountered.10

In another study, a case of digital necrosis due to septic embolism was reported in a 19-year-old patient as a result of upper respiratory tract infection.11

PATIENT’S CONSENT:
Informed consent was obtained from the patient who participated in this study.

AUTHORS’ CONTRIBUTIONS:
NO: Concept, data collection, analysis, and critical reviews.
AS: Design, supervision, literature search, and manuscript writing.
All the authors have approved the final version of the manuscript to be published.