Concurrence of Thyrolipomatosis with Hyperthyroidism and Ectopic Thyroid Tissue

The thyroid gland is associated with extensive morphological variations and developmental anomalies. Ectopic thyroid tissue (ETT) is one of the rare developmental anomalies characterised by the presence of thyroid tissue in places other than the anterolateral region of the second to fourth tracheal cartilages.1 On the other hand, thyrolipomatosis (TL) is another rare disease characterised by the presence of mature adipose tissue in the thyroid gland.2 The etiology of TL remains uncertain.2 Some authors have suggested that thyroid gland is infiltrated by heterotropic groups of fat cells during embryogenesis.3 To this knowledge, ETT and TL concurrence have not been reported in the Medical literature. 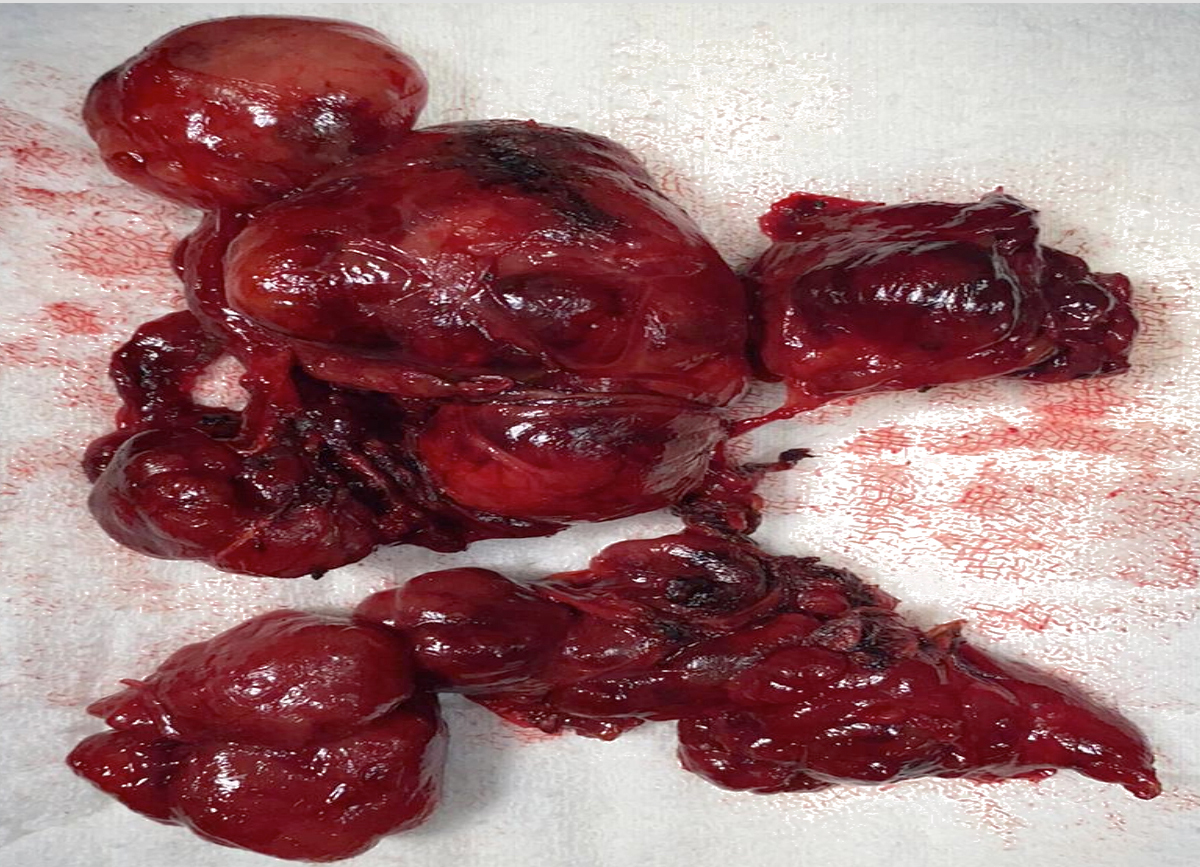 A 57-year female presented with hyperthyroidism, dyspnea, and dysphagia. Patient was treated with methimazole for the past 2 years upon hospital admission, patient’s FT4 and TSH levels were 1.45 ng/dL and 0.506 uIU/mL, respectively. Preoperative computed tomography was shown in Figure 1. She had compression symptoms. Total thyroidectomy was planned. In surgery, an ETT of approximately 3×4 cm was detected in the right retrosternal region, in addition to the orthotopic thyroidectomy material, and excised. Pathology reported these lesions as TL and ETT. Total thyroidectomy pies imaging was shown in Figure 2.

This is the first case presenting with concurrent ETT and TL in the medical literature and this association may support the embryogenic theory. The literature reveals that TL cases usually undergo total thyroidectomy due to the compression symptoms.2,4 Compatible with the literature, our case underwent total thyroidectomy due to the significant compression symptoms. TL patients have fatty thyroid nodules with extrathyroidal extension that should be distinguished from parathyroid tissues that normally contain fat.5 If TL is detected before or during the surgery, intraoperative parathyroid imaging methods such as intraoperative gamma probe application, intraoperative ultrasonography, and indocyanine green imaging with autofluorescence may help to preserve parathyroid glands. Also, the presence of ETT should be looked for before and /or during surgery if a patient is diagnosed with TL.