ABSTRACT
Repairing bilateral cleft lip (BCL) with a modified Z-Plasty technique to overcome many complications encountered with other traditional techniques was attempted in a group of Egyptian subjects at the Department of Oral and Maxillofacial Surgery, Faculty of Medicine for Girls, Al Azhar University, Cairo, Egypt between May 2018 to May 2021. The study included 20 patients suffering from primary BCL of both genders with ages ranging from one week to one year. 60% of the patients were female and 40% were males. The modified Z-Plasty technique was used in all patients. Wound healing in all cases was uneventful. No inflammation, infection or wound dehiscence were reported in this study. Postoperative gummy show improved significantly (p=0.001), and 70% of patients had zero postoperative maxillary ridge show as lip lengths improved significantly. The clinical results of the modified double Z-Plasty technique used for closure of BCL were very interesting and avoid scarifying vermillion tissue in addition to the increase of both philtrum length and lip volume.

One of the most frequent congenital deformities is a cleft lip which can be isolated, unilateral, or bilateral.1 The severity of bilateral cleft lip (BCL) deformity varies considerably between patients.2 The premaxilla may be floating as in BCL/palate patients or deviated as in unilateral cleft lip palate patients, with a rudimentary philtrum and short columella.3 Many procedures for correcting this deformity are acceptable, but we may face difficulties due to the short philtrum, which exposes the upper incisors and/or gums. This condition bothers surgeons, especially in patients with BCLs.4,5

The rotation-advancement technique and the triangular flap technique are the two most often practiced surgical techniques for cleft lip repairs.4 Millard was the first to describe the rotation-advancement approach, which has the disadvantages of the possibility of nostril opening stenosis, difficulty closing very wide clefts and increased difficulty for inexperienced surgeons due to the technique's reliance on intraoperative judgment for flap modification. Tennison's triangle flap technique has the benefit of being based on precisely measured and established landmarks, allowing even inexperienced surgeons to conduct the operation easily.4

This flap also enables the repairing of larger clefts. The problems of this procedure are largely cosmetic in nature such as failure to produce a philtrum ridge on the cleft side, a scar that overlaps cosmetic components, inability to reach nasal cartilages during repair, and inability to readjust the repair once surgery has begun.1,6

The majority of modern procedures attempt to correct for philtrum deficiencies; nonetheless, the results of postoperative surgery after closure are characterised by attenuated and rudimentary philtrum, resulting in the increased incisal show and decreased lip volume. As a result, in the current study, we revisited a modified double Z-plasty surgery to augment the philtrum area and the cleft side in order to optimise lip length and prevent incisor and/or gum show.5

This clinical study was performed in the plastic surgery department, Faculty of Medicine for Girls, Department of Oral and Maxillofacial Surgery, between May 2015 and May 2021. This study was conducted in accordance with Helsinki declaration of the clinical studies guidelines and all patients’ guardians signed informed consent before surgery.

The following inclusion criteria were used to choose study participants: bilateral cleft lip children, normal weight for their age, normal haemoglobin level, and no previous attempt at repair (primary closure), regardless of gender. Patients with unilateral cleft lips who had previously been treated with any cleft lip closure surgical procedure (Secondary closure) were excluded. All patients submitted through clinical examination to ensure no other associated congenital anomaly or medical compromised health status. The incisal show was measured from the upper central incisal edge to the lower vermillion border of the upper lip. The gummy show was evaluated by measuring the distance from the lower border of the central part of the vermilion of the upper lip to the crest of the maxillary ridge.

Postoperative measurements were compared to preoperative measures and considered as the main study outcome. Other factors to consider are wound healing and scar development.

All surgeries were performed under general anesthesia and in complete aseptic condition; a vasoconstrictor was injected along the incision line to reduce bleeding during the surgery. The incision was starting along with white roll of a philtrum and extended superiorly on both sides of the philtrum to the base of the nose and then the incision directed laterally in a horizontal fashion with the substance of the lip. From the lateral end of that horizontal incision; the incision extends vertically, creating a double Z incision on either side of the cleft. After incision; the dissection started from the white roll of the philtrum to be based on the lingual flap of the philtrum. Then the dissection of all incision lines was carried out to separate skin and mucous membrane from the muscle layer allowing three-layer closure. After flap dissection, the cleft side moved to infer medially to be adapted around the philtrum. The muscle layer is closed first by 3-0 vicryl suture material, the skin using 5-0 prolene, and then the mucosa using 3-0 vicryl. All patients submitted to strict wound care measures, antiobiotics, and anti-inflammatory medication for 7 days.

All patients were evaluated postoperatively to assess the presence of signs of infection, inflammation, and wound healing complication as dehiscence. Postoperative clinical evaluation was completed immediately following surgery, as well as at 1, 3, 6, and 12 weeks postoperatively, and results were expressed as frequency and percentages. Incisal and/or gum show, as well as philtrum length measurements in mm, were compared to the preoperative assessment and presented as mean and standard deviation (SD). SPSS version 16 was used to collect and analyse the data and Paired samples test was used to compare the difference between post and preoperative measurements. The level of significance was considered when p level was less than 0.05.

Twenty patients of both genders were enrolled in the study via a non-random convenient sampling technique of bilateral cleft lip patients with ages ranging from one week to one year. Sixty % (12) of the patients were female and 40% (8) were males. Wound healing in all cases was uneventful.

No inflammation, infection or wound dehiscence were reported in this study. The preoperative maxillary gummy show in almost all of the patients ranged from 4 to 10 mm, with a mean value of 6.4 ± 1.9 mm. In all cases, postoperative gummy showed significant improvement with a mean score value of 0.4 ± 0.68 mm (p<0.001), and 14 (70%) patients had zero mm postoperative maxillary show (Figure 1, a-d).

In this report, we attempted to evaluate our Z-plasty modification, which aimed to augment the rudimentary, short philtrum by bilateral flaps from both sides and scarification of the white role of the philtrum to be replaced by flaps from both sides, with the aim of augmenting the philtrum and assisting in columellar lengthening. The vermillion border tissue was preserved in this study and rolled inside to support the philtrum, increase the thickness, and improve the sulcus depth. The vermilion tissue was not sacrificed as in other techniques, which may impair the philtrum length later on, as done with the traditional Millard approach, and thus this lengthening is kept for future procedures. 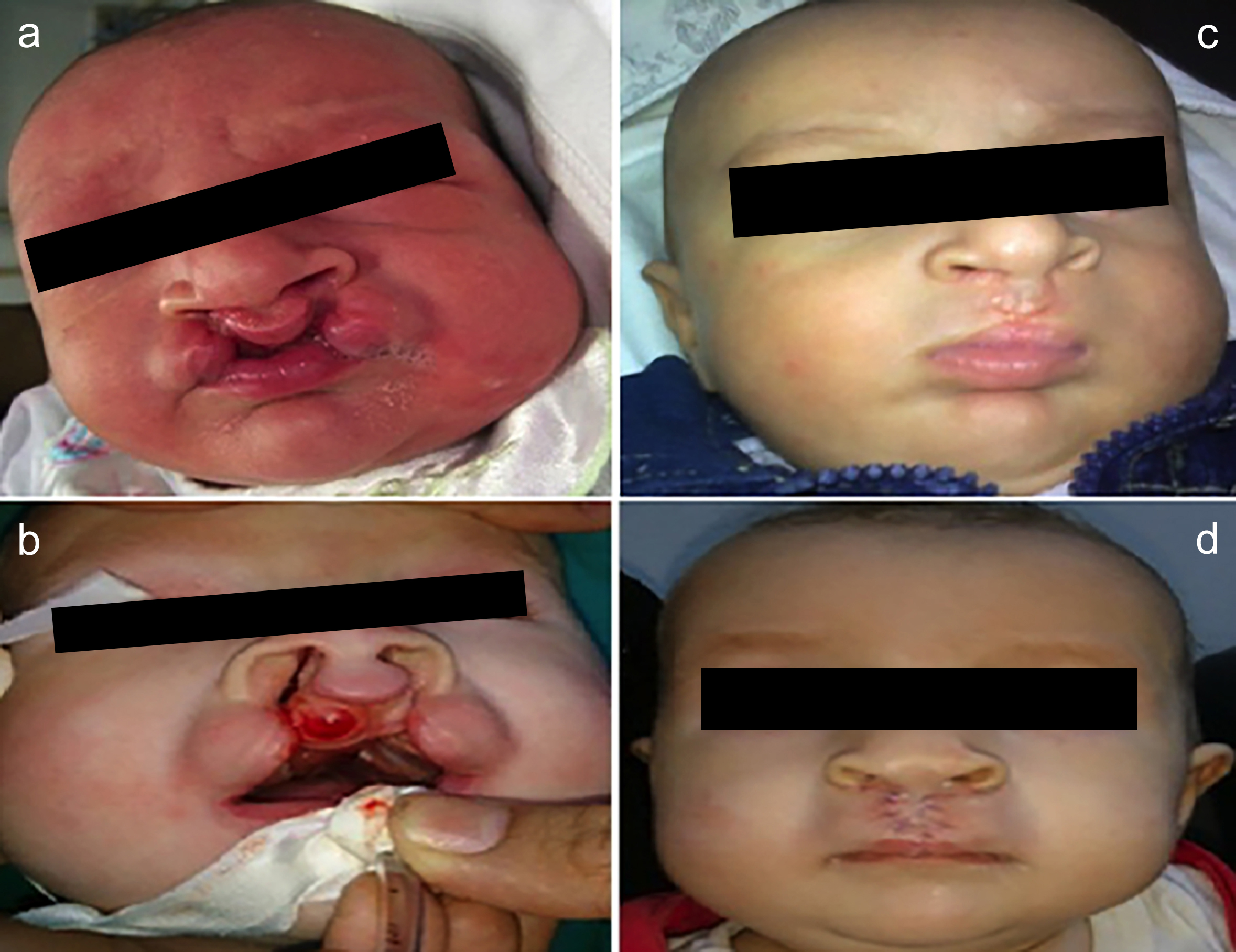 Every technique has advantages and limitations, and trials to adjust techniques to provide the greatest results for patients continue between surgeons because the ideal technique does not yet exist. Advantages of the current modified technique include that the traction of both cleft sides towards the midline approximates the clefted orbicularis muscle and facilitates its reconnection. Suturing of the clefted sides together in the midline act as a tension band supporting the repaired muscle. Lengthening of the middle part of the upper lip which later can cover the incisors completely. Better esthetic results than traditional techniques. This technique could be used for primary cases or for revision in cases suffering from excessive exposure to the incisors. There was no need for preoperative orthodontic extra work or lip adhesion surgery, and complications were decreased while aesthetic functional rehabilitation was obtained.

PATIENTS’ CONSENT:
Informed consent was obtained from the patients’ parents to publish the data concerning this case.

COMPETING INTEREST:
All authors declared no conflict of interest.

AUTHORS’ CONTRIBUTION:
EHE, BA: Conceived and designed the study, conducted research, and collected and organised data.
BA, MMG, SAE: Analysed and interpreted data.
SAE, EHE: Wrote initial and final draft of article.
All authors have critically reviewed and approved the final draft and are responsible for the content and similarity index of the manuscript. All authors agree to be accountable for all aspects of the work in ensuring that questions related to the accuracy or integrity of any part of the work are appropriately investigated and resolved.